Real Madrid are tasked with finding a ready-made replacement for Karim Benzema during the time he is out of action due to the injury he suffered last week.

During the three games following the striker’s injury, Carlo Ancelotti has tested Eden Hazard and Rodrygo Goes in the centre forward position, with the Brazilian excelling the most out of the two.

This week at the MBP School of Coaches, we are going to describe why Rodrygo Goes has had a greater return than the Belgian in this difficult mission of filling in for Benzema.

One of the main differences between the two players lies in their ability to perform different movements in the final third of the pitch. Hazard is more of a ‘floating’ player, meaning that his movements always tend to be in support, either to receive the ball to feet and face up to goal, or with the tactical intention of attracting the opposition defender to create space for a teammate.

On the other hand, Rodrygo is a more dynamic player. The Brazilian has more variability of movement in the final third, as he can come in support as the Belgian does or attack the space through runs in behind if he identifies a defensive imbalance – and even to generate spaces for teammates.

The variability of the Brazilian’s attacking runs provides the team with more variability in the way they can direct attacks, regardless of the way the opposition defends.

Another big difference between both players is their aggressiveness in possession. Rodrygo is a more direct player on the ball, as his behaviour with it is more individualistic. However, the Carioca also understands the game through connecting with teammates, as was reflected in the lead up to Vinicius’ goal against Mallorca, whereby driving with the ball attracted enough opponents to provide the opportunity for the pass to his unmarked teammate.

In contrast, Hazard is a much more associative player in the actions he performs. Although during his time at Chelsea the Belgian showed an aggressive nature in his dribbling, after the series of injuries he has suffered at Real, the attacker has modified his approach, taking fewer risks on the ball and prioritizing passing over driving with the ball and dribbling.

This behavioural adjustment makes him a less fearsome player in the attacking third, as it is more predictable for defenders to anticipate what he is going to do.

Finally, the last major difference between the two players, and an essential aspect for the striker position, is the eye for goal. Although Hazard has a higher number of goals throughout his career, something understandable due the longer career he has had, the current data shows that the chances of scoring increase with the Brazilian on the pitch.

The young star has shown his love of hitting the back of the net since his debut, right up to the present day. In addition, Rodrygo has proved that he can be decisive in big matches such as last season’s game against Manchester City in the second leg of the Champions League semi-final, scoring two goals on the night.

One of the great strengths of the Carioca is his impressive application of the different individual striker fundamentals. One of the most notable of these is the IFP ‘Orientating the body to prepare the finishing action’. 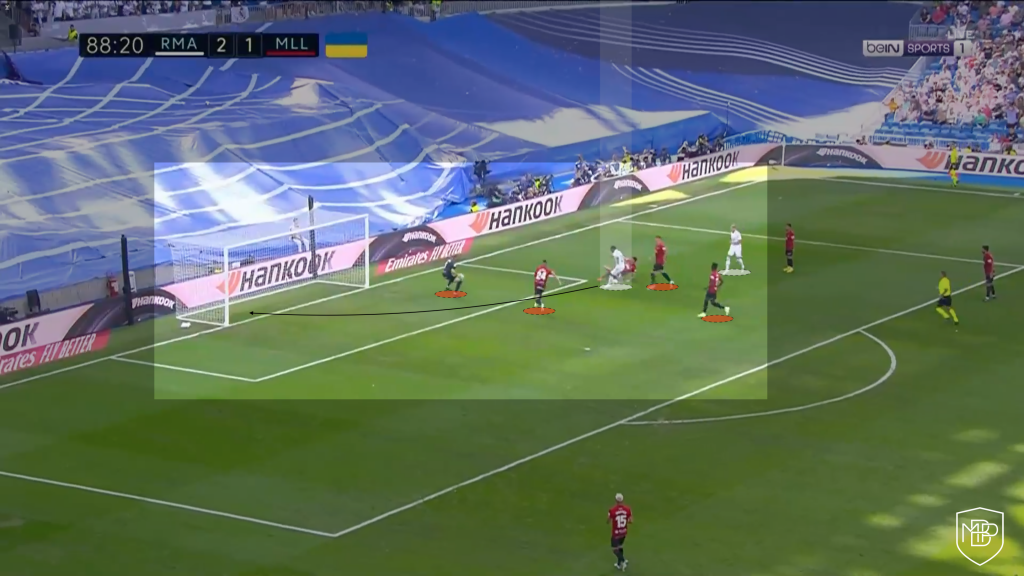 Whether it is a shot or in the air, the forward has the ability to adapt his body position to perform the technical skill successfully, as well as choosing the most appropriate contact surface depending on the situation.

Although both players bring different individual and collective characteristics to the Real Madrid, Rodrygo Goes is currently the player who best fits the current side. As we have discussed in the analysis, the Brazilian manages to bring more attacking variability to the Italian coach, in addition

The System Vs The Game Structures