Real Madrid are on the look out for replacing long time veteran Marcelo Vieira, in preparation for his eventual departure from Real Madrid. After more than a decade at the club, it seems that Marcelo’s career at the Santiago Bernabeu is nearing its end.

The arrival of Frenchman Ferland Mendy at Real Madrid in 2019, coupled with the fact that at 33 years old, and in a period where the game has evolved towards a more athletic sport, has relegated the Brazilian full-back to a secondary role in the current squad.

For this reason, at the MBP School of Coaches, we are going to analyse the three options that could replace the Madrid legend, observing in depth the individual aspectsthat stand out in each of them.

The first option to look at is from the academy – Miguel Gutiérrez. The youngster received some minutes last season under former coach Zinedine Zidane, and, in this campaign under Carlo Ancelotti, has continued his excellent form.

Miguel, unlike Marcelo, possesses a more complete full back profile. The academy product is strong in 1vs1 situations due to his conditional capacity. His speed of movement makes him unbeatable in these types of situations. Likewise, the Madridista has mastered to perfection the full back fundamental of ‘Identifying the responsibilities of the attackers in your zone’.

In situations where there are two attacking players nearby, the young starlet knows which opponent to take responsibility for, always prioritizing the protection of the central channel.

Furthermore, just like the Brazilian, Miguel makes a difference in the attacking half. This season, he has contributed  a total of 8 assists with Castilla and two goals. The academy graduate boasts a fantastic cross from any zone of the field, especially from zone A and B, always knowing how to optimally adjust the timing between the cross to the run of his teammate. 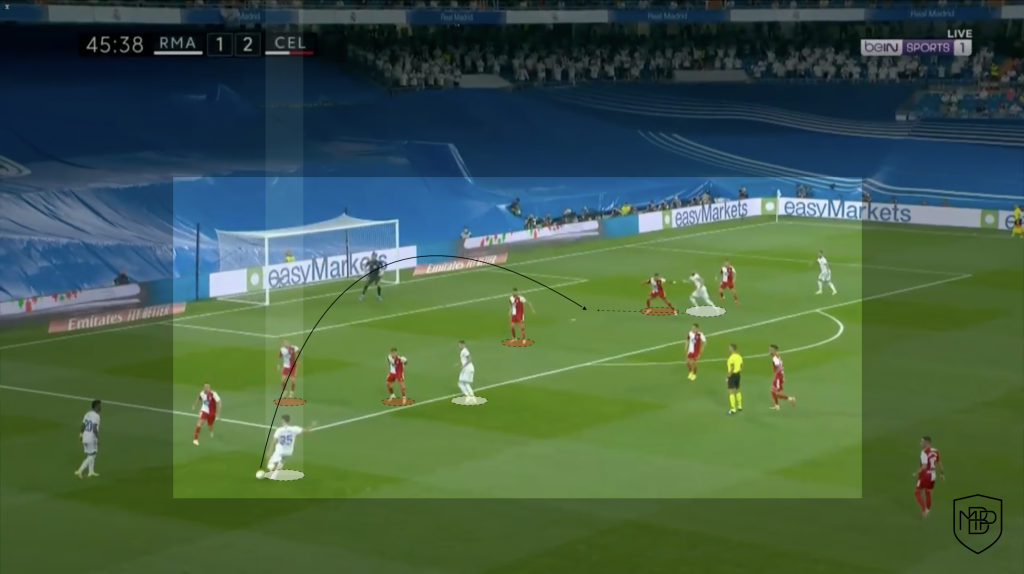 In conclusion, the investment in Miguel has paid off, as the player now has the potential to develop into an elite star, from an individual and collective perspective.

The second player to highlight, and the one who has been the most talked about in recent weeks, is the former canterano and current Rayo Vallecas player, Fran García.

Fran has similar characteristics to Miguel Gutiérrez, though the former holds more experience at the elite level after the past two seasons at the Estado de Vallecas – one in the Segunda, and the current one in La Liga.

Delving into the behaviors performed by him, the first thing that strikes us is the great rapport that Fran has with the players who play on the same wing.

The Rayo player has a highly developed cognitive structure which allows him to know what spaces to occupy and when to occupy them, always taking into account the position of his teammates. Likewise, individual fundamentals of the fullback such as: offering support on the outside to generate space inside and incorporating into the finishing area from the creation of space on the same wing are very common within the youngster’s game.

Finally, one of the great features that consolidates Fran as one of the top candidates to replace Marcelo is his great defensive discipline.

The player excels in perfect tactical positioning, always maintaining a perfect width and depth in relation to the rest of his teammates in the defensive line.

In summary, if Real Madrid finally decide to go for Fran García, they will secure a ready-made player with fantastic individual skills, but above all, a specialist in contributing to the collective.

Lastly, the third and final option that we, at MBP, believe could fit the bill as the club’s new left back is RB Leipzig’s Angeliño.

Unlike the previous two players, the Spanish full back would be a much more established player at the European elite level. The Leipzig player has reguarly had impressive seasons in Germany.

Angeliño’s profile is much more similar to Marcelo’s, as he stands out above all for his attacking potential. Unlike the other two full backs, the Spaniard’s defensive performance is not so remarkable. That is why the position where he has managed to achieve his best form is that of a full-back with a defensive structure of 3 centre backs.

In regards to the most outstanding individual behaviours, the first fundamental that we want to highlight and that, in turn, he shares with the first candidate, is the ability to perform highly accurate crosses from the wing.

Regardless of the crossing zone, whether it is A, B, C or D, Angeliño manages to identify the free player in a formidable way, in addition to giving the advantage to the attacker over their direct defender.

The second fundamental consistently applied to perfection is the ability to guarantee the atacking width of the team in the different moments of the game. Through this, Angeliño often manages to attract opponents generating passing lanes through the centre of the pitch.

In brief, the possible signing of Angeliño to Real Madrid would bring even more attacking potential to Ancelotti’s side. However, the Spanish full-back would have to improve in the defensive area if he wants to establish himself in this position.

Marcelo’s departure from Real Madrid will mark a before and after moment in Real Madrid history. His replacement will have to put in top performances to fill the shoes of Santiago Bernabéu’s favourite Carioca.

At the MBP School of Coaches, we will be very interested to see who the club decides to sign, and whether they will go for the 3 stars we have analysed today.

AFRICAN CUP: ANALYSIS OF THE 4 MOST OUTSTANDING PLAYERS

LIVERPOOL VS REAL MADRID: THE 4 TACTICAL KEYS FOR THE CHAMPIONS FINAL

Marco Asensio: Why is he a starter for Real Madrid?