Didier Deschamps’ French side is one of the teams that have been tipped as favourites to win December’s World Cup. Les Blues, as well as being current champions, are led by one of the best players in the game at the moment, Kylian Mbappé.

Therefore, from MBP School of Coaches, we will analyse the base structure of the team, their two strongest phases of the game their game, and, finally, their star player.

The initial set-up of the side usually fluctuates between two different systems: the GK-4-3-3 and the GK-5-2-1-2. Depending on the players available and the opposition, Deschamps varies between the two, but always maintains the same general principles of play.

When playing with a 5 at the back, the wing backs tend to push very high, turning the team’s dynamic attacking organisation into a GK-3-1-2-4 or GK-3-2-1-4. In doing so, they look to fix 1vs1 players in the opposition’s defensive line.

When they are playing with a line of 4 at the back, the dynamic organisation of the team during the vast majority of the different moments of the game in the attacking phase is a GK-3-1-2-4, with one of the full-backs anchoring as a centre-back, and the other increasing the attacking height on the far side to guarantee the width.

In terms of the dynamic organisation of the team in the defensive phase, France usually maintain the same structure as their base formation. Depending on the height of one of the central midfielders, they play a GK-5-3-2 or GK-5-2-1-2, or a GK-4-3-3 when they play with a line of four defenders at the back.

However, regardless of the dynamic organisation they use, Deschamps’ team has a tendency to create defensive sub-blocks, i.e. to split into two blocks of players, forming a first block of eight players plus the goalkeeper, and another block of two players further forward, who are alert to a possible defence-attack transition.

Phases of the Game

However, when we analyse the attacking phase, we can see that it is the most decisive phase for the French, not because of collective behaviour, but because of the individual quality of the players.

For this reason, the French coach seeks to accumulate a lot of players in the central channel, leaving the wings free for the wingers or full backs depending on the base structure he uses from the start.

Once the ball reaches the final third of the pitch, players like Benzema, Griezmann, Nkunku and Mbappé make the difference, generating quick triangles that manage to disorganise any opposition defence.

Another of the team’s characteristics in the offensive phase is the role played by players such as Griezmann and Nkunku. In their teams, both usually operate as strikers, but in the national team they act as attacking midfielders, playing a very important role in the moments of dynamic build-up and progression of the play.

The second phase of the game that Les Coqs excel in is the attack-defence transition. As with their attacking phase, their success in this area is not due to their collective behaviour, but to the technical and physical quality of their players.

Although Deschamps always tries to prioritise 3+1 behind the ball in order to rationally protect space in the event of a turnover, France are also physically imposing.

Players like Tchouaméni, Camavinga, Fofana and Guendouzi possess an exceptional conditional structure. This factor allows them to regain space at the back, thus rebalancing the team’s dynamic defensive organisation.

Another aspect to highlight about them is their ability to win the ball back without the need for fouls that could lead to cards.

Kylian Mbappé is the reference player of the French national team. The striker arrives at the World Cup as one of the best players in the world.

The current PSG player dominates all attacking areas. He has a great command of situations in tight spaces, as well as in open field situations.

In addition, ‘Donatello’ has developed a killer instinct in front of goal. The striker is getting better and better at executing the individual fundamentals of ‘Orientating The Body To Prepare The Finishing Action’ and ‘Finishing The Ball Quickly Yet Executing It Slowly’.

The reigning World Champions enter the competition with the mission to do well once again. Although they do not stand out for their collective performances, the French have a great line-up of players that makes them one of the favourites for the big event. 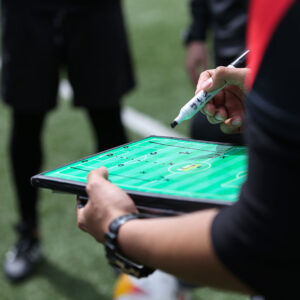