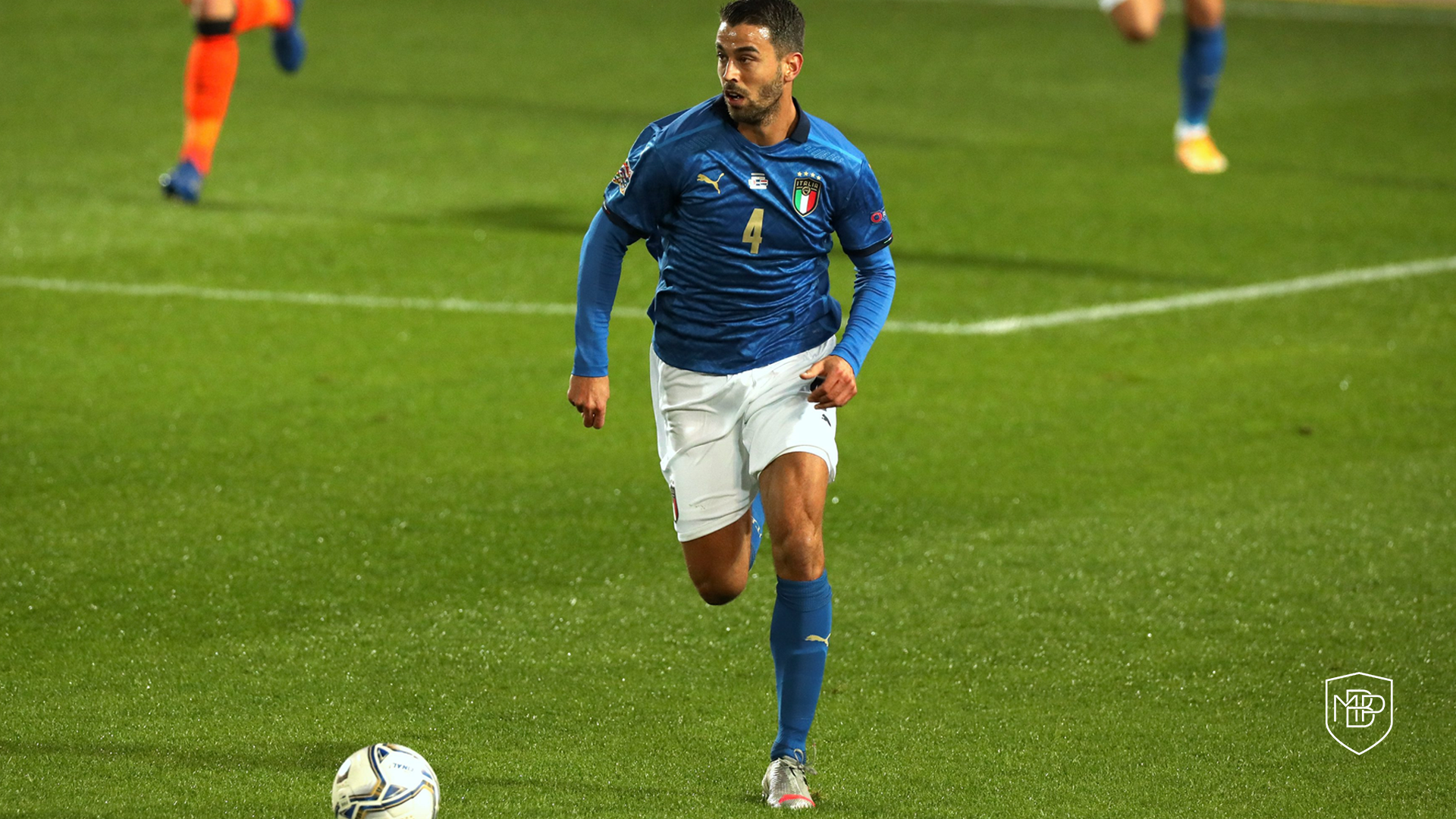 The group stage of EURO 2020 has brought us standout performances from the game’s top stars. Through their individual actions and by adding their own quality to the collective, they have managed to excel above other favoured competition.

At the MBP School of Coaches, we want to highlight the important role of the Italian left back Leonardo Spinazzola, both from an individual and a collective perspective. To do so, we have made an in-depth tactical analysis on his impact on the team, with the individual fundamentals he has applied most successfully. Let’s go!

Impact on the collective:

To explain the Roma player’s impact on his national side, first of all, we must explain the general game idea of the Azzurri. We will dive deeper into their attacking phase, where they have been dominant in their first 3 matches

Roberto Mancini’s side plays with an associative style of play. Using a GK-4-3-3 base structure, the Italians aim to control the tempo of the play by generating situations of numerical superiority at different moments of the possession, up until they reach the edge of the box where they show great decisiveness.

So how does Spinazzola influence the team?

– Firstly, in the moments of the build up and the progression, the Italian No4 has managed to provide the necessary width and depth to his side, allowing him to create space between the opposition’s lines so that his team can progress in an associative way. 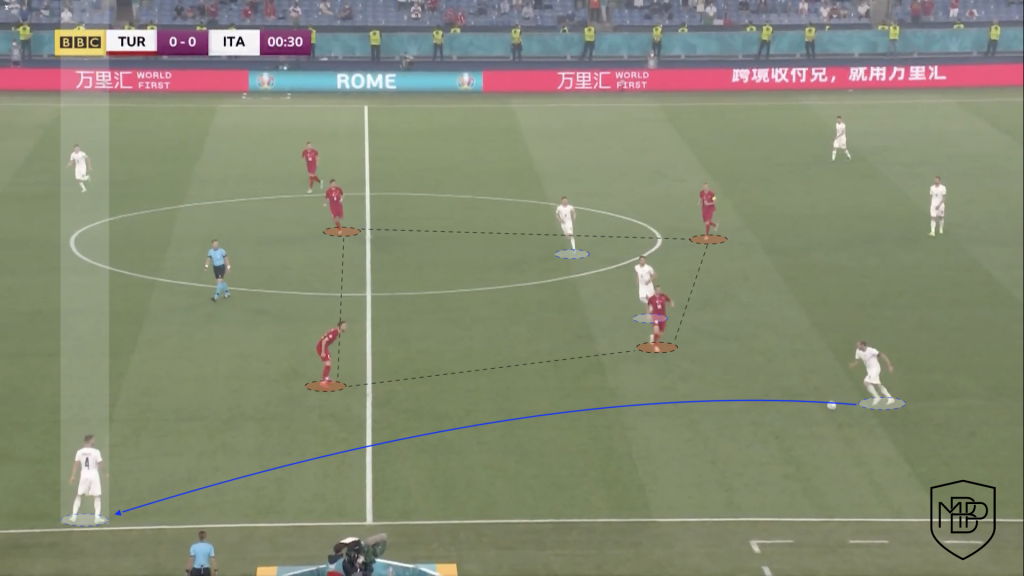 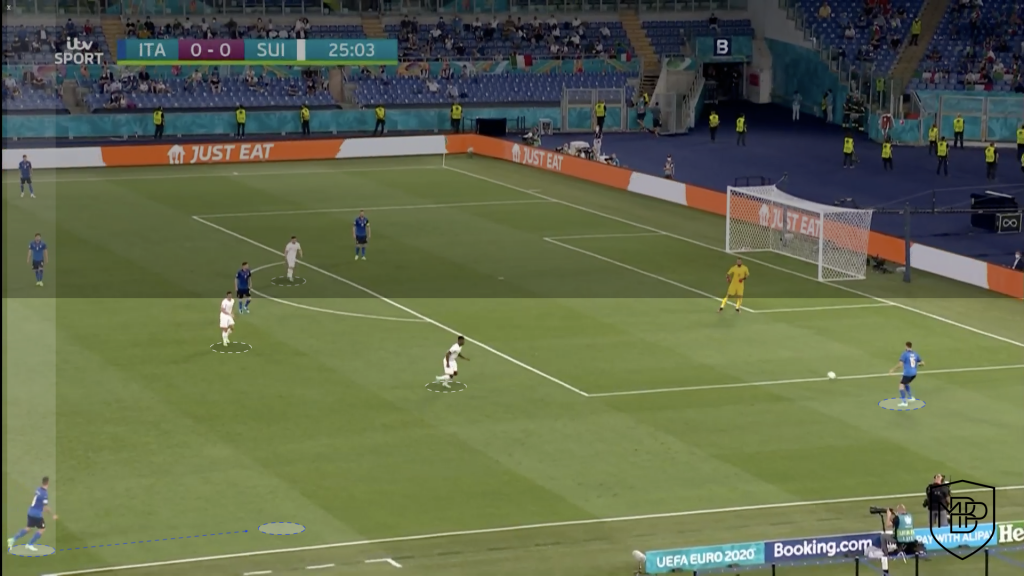 – Secondly, when the ball goes into the opposition half in the attacking third and the finishing zone, Spinazzola has shown a great understanding with Lorenzo Insigne, to the point of forming a very productive attacking constellation for the team. As a result of this, the Italian national team has directed 38% of its total attacks through the left wing during this European Championship. 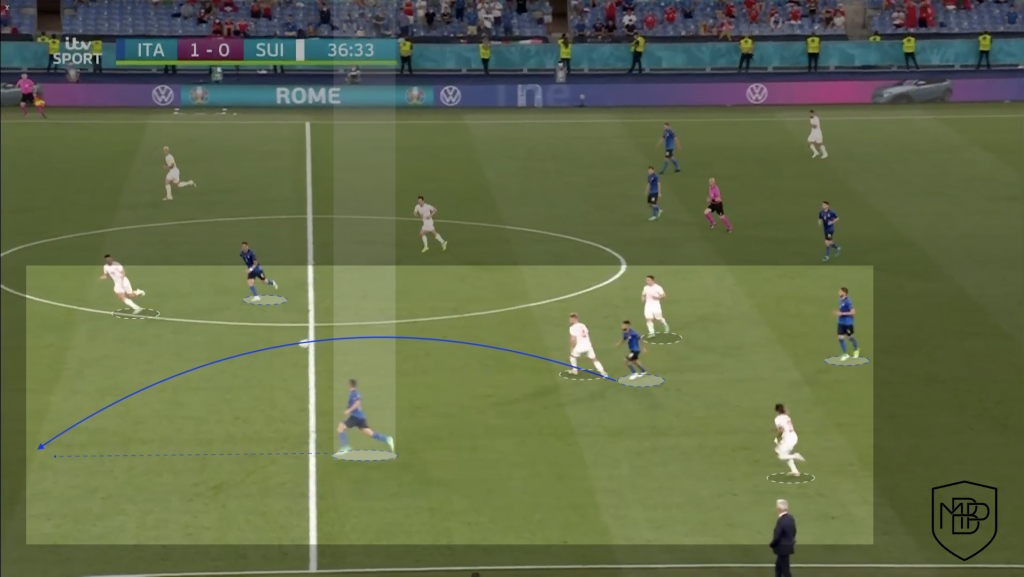 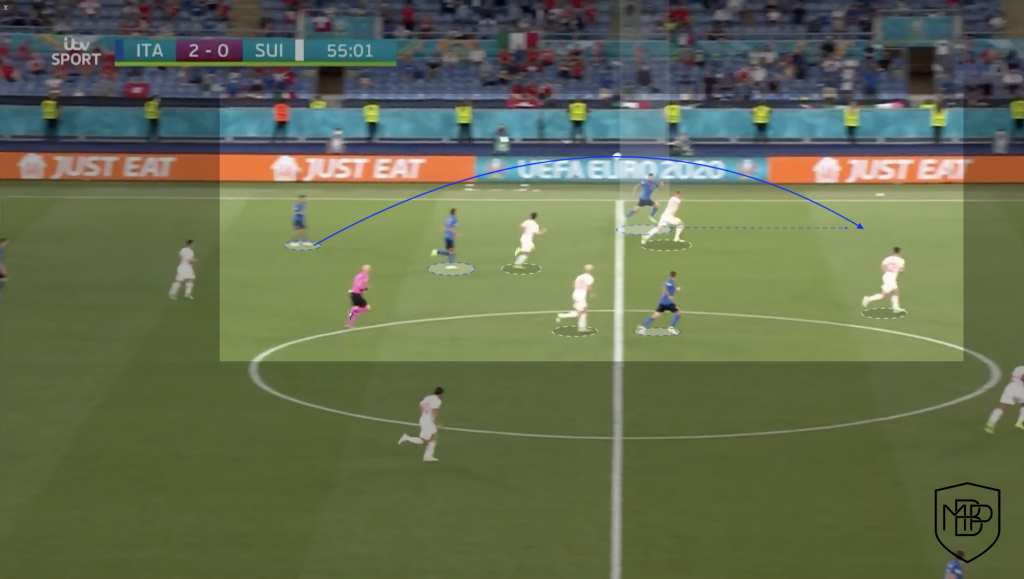 After contextualising the role of the Italian left back within the collective, we will delve into how he has performed on an individual level through the Individual Fundamentals by Position. To do this, we have selected the 3 fundamentals that he has performed best so far.

Through his position as a left back, Spinazzola knows how to give maximum width on his wing to create more space in central areas. Furthermore, the Italian’s position in relation to the ball is always available to offer a passing line, either from the outside to the outside, or in the opposite way, from the inside to the outside. 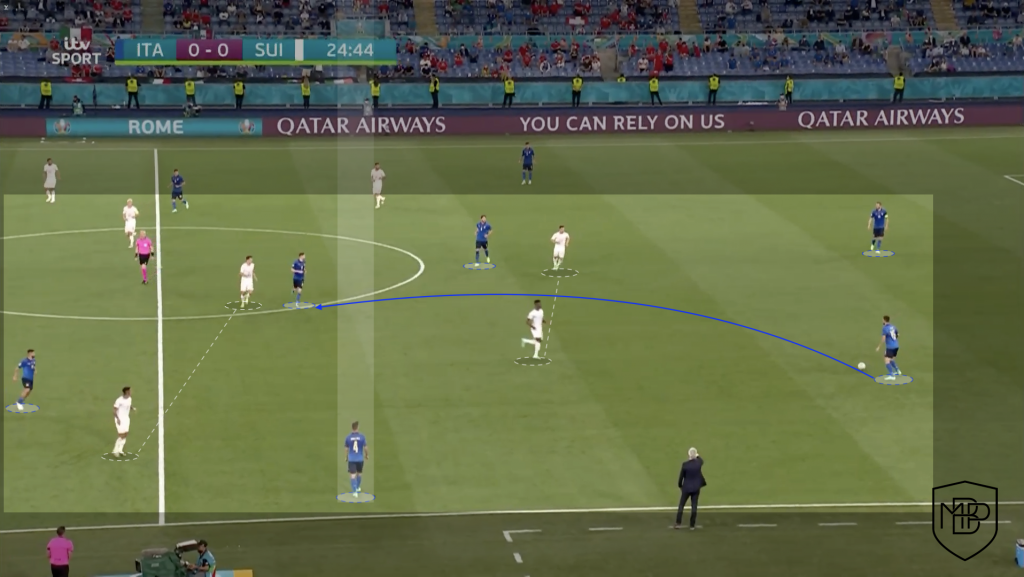 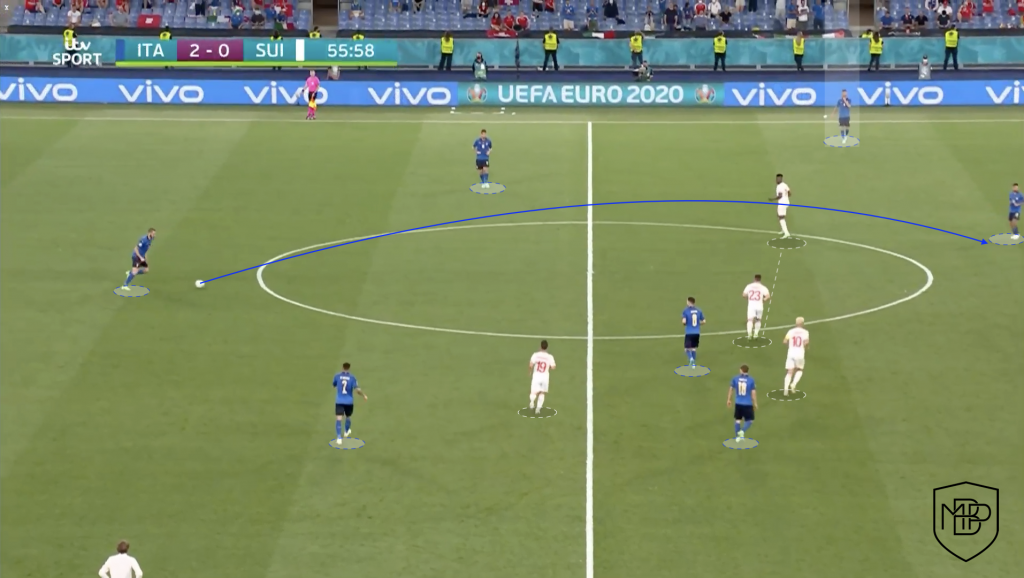 In relation to the previously mentioned attacking constellation formed by Spinazzola and Insigne, the Roma star has been able to interpret when to join the attack and when not to, depending on the movements of his team-mate.

Many of his runs into the final third of the pitch are provoked by spaces freed up by the Napoli winger, which the left back has been able to exploit. This has led to a great deal of defensive confusion for the opposition defenders. 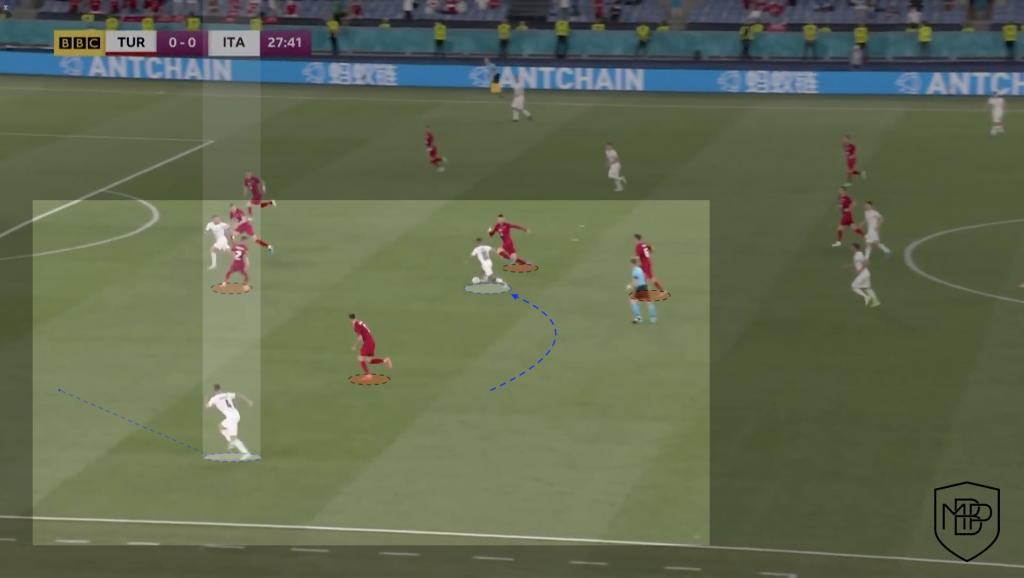 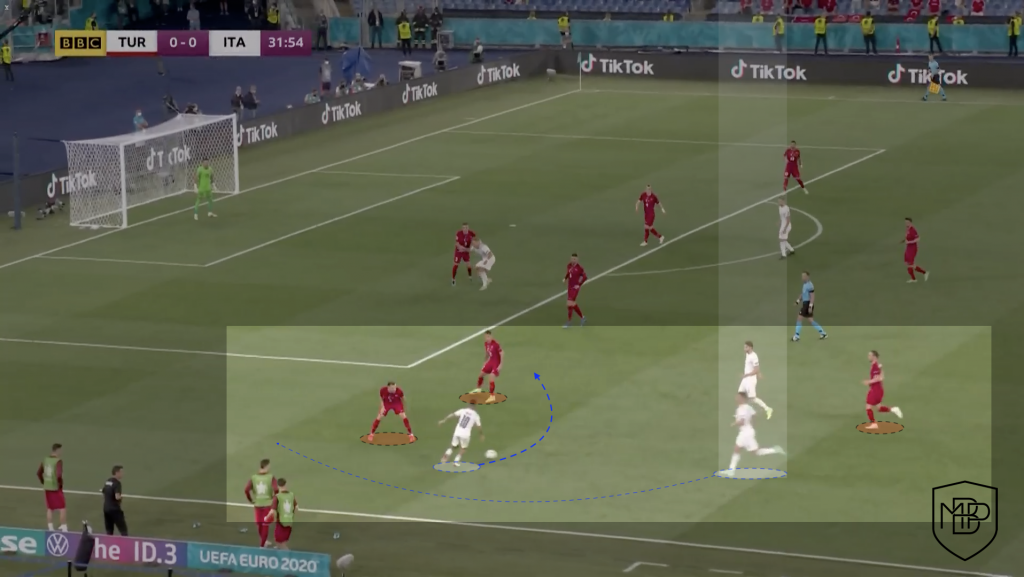 One of the great strengths of Spinazzola is the identification of his responsibility depending on the situation. At the Euros, where structural variability is the norm for each team, at each moment, the Italian understands how to identify who he is responsible for in his defensive duties.

In addition, Spinazzola has displayed great defensive coordination with his teammates, rebalancing spaces and forming a strong collective defensive unit. This has helped the side to 3 straight clean sheets in the group stage. 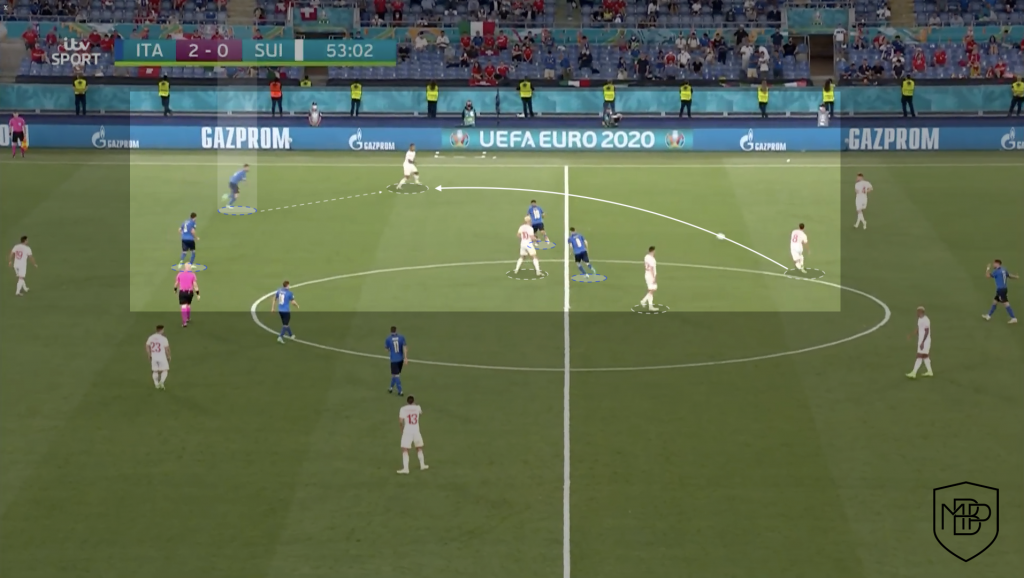 Spinazzola has been one of the great revelations of the group stage at this EURO 2020. From the tactical organisation that is characteristic of Italian teams, he has been able to support the side through his own individual qualities.

All of us at MBP are looking forward to seeing Spinazzola’s evolution in the knockout stages of the competition, and in turn, to see the evolution of the national team that has arguably produced the tournament’s best football so far.

Deepening in the mbp method: why train certain contents?