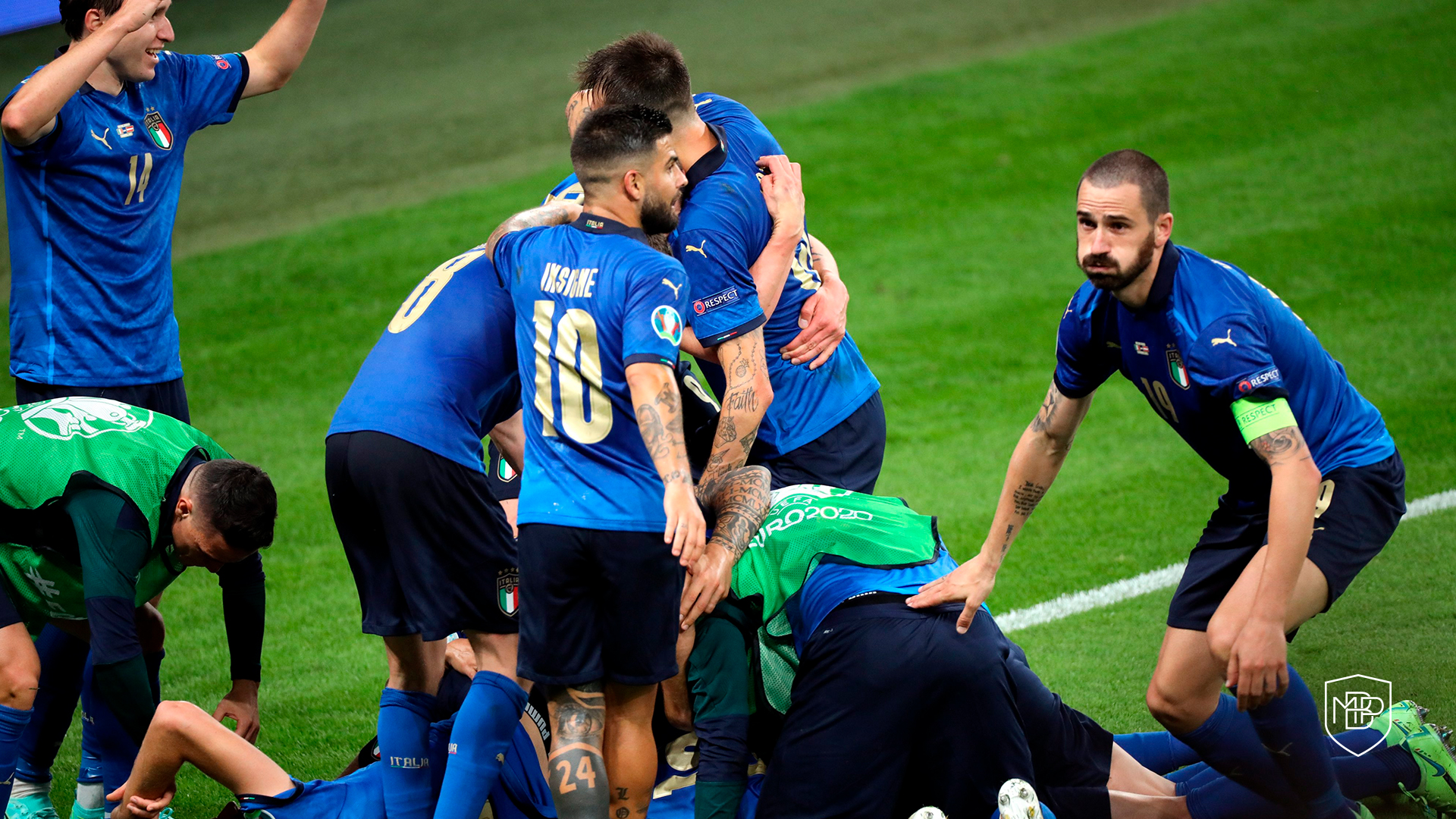 EURO 2020 has reached its end. Yesterday, Italy and England played a very balanced final from a tactical standpoint, where both teams had their ‘moments’ during the course of the match, with the contest finally being decided by a penalty shootout.

On the Italian side, coach Roberto Mancini remained faithful to his style of play and to his usual starters, making no changes to either players or structure. Italy started with their usual GK-4-3-3 base structure, which fluctuated in attack to a GK-3-4-3, with the right-back staying in the defensive line and Emerson, the left back moving higher.

For England, Gareth Southgate made structural changes from their previous matches and managed to surprise the Italian team at the start of the match, starting with a GK-5-2-3 structure. They focused their attacks through the wings and the ‘false 9’ figure of Harry Kane. In the defensive phase, they moved into a low block in their own half, accumulating many players in the active zone of the ball.

From this contexualisation of the analysis, we will move on to focus on 4 key points: who was the MBP of the match, what was the key tactical moves, which coach made the greatest impact on the game and how the goals were scored.

On this occasion, the ‘MBP’ of the match was not one player, but rather two players who formed a brilliant constellation, that of Leonardo Bonucci and Giorgio Chiellini. Both players not only stood out in yesterday’s match, but also throughout the tournament. The defensive duo will be well remembered in footballing history, as they have consistently produced amazing defensive performances against some of the most dangerous strikers in the world. 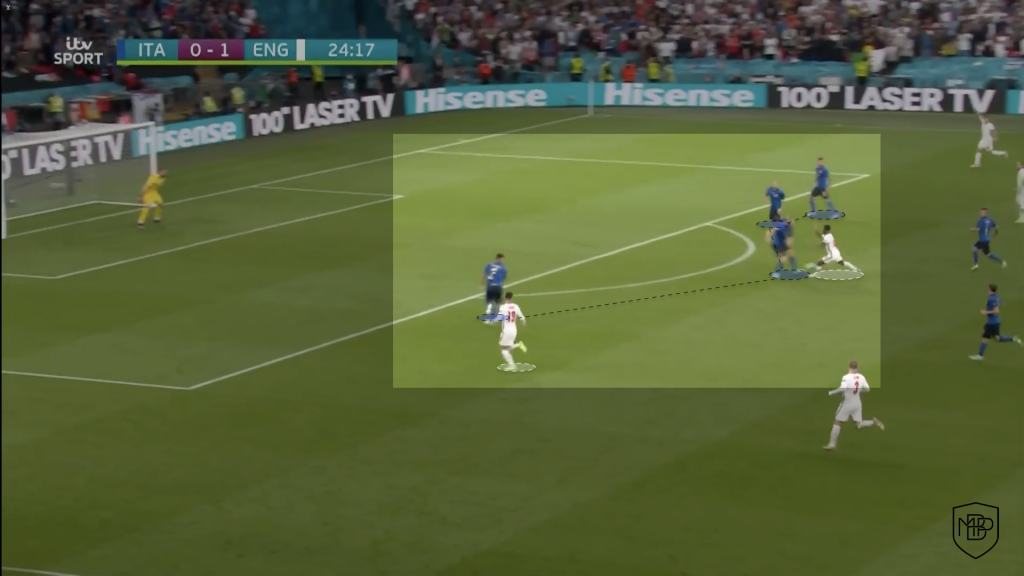 For the second fundamental, during yesterday’s game, we could see how Chiellini and especially Bonucci were in charge of monitoring the opposition forwards. The aim was to prevent a possible defence-attack transition by England, in the event that they won the ball and aimed to connect to one of their more advanced players. 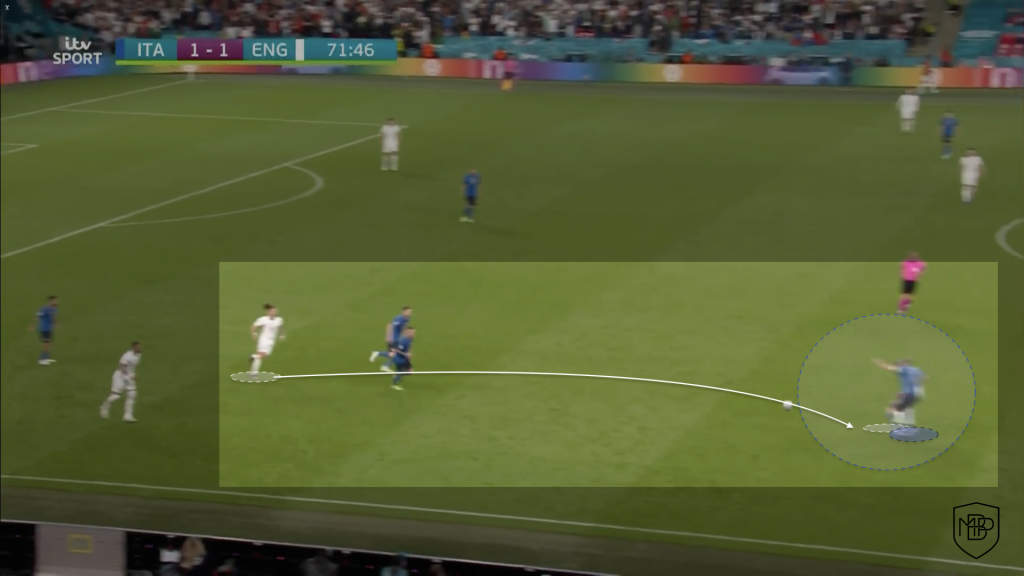 The key tactical moves of the match were Roberto Mancini’s side’s creation of diamonds in the attacking phase on the wings. Through their usual GK-4-3-3 and the common structural change in the attacking phase to a GK-3-4-3, Italy formed diamonds in the wide channels. The main objective was to generate different passing line heights, so as to be able to settle in the opposition half with controlled possession.

To do this, the Italian team maximised the width of their first line of three defenders, with the main vertex of the diamond being the central centre-back. From there, the aim was to progress up the same  wing, or to attract opponents in the active zone to look for the opposite wing for a situation of spatial advantage. 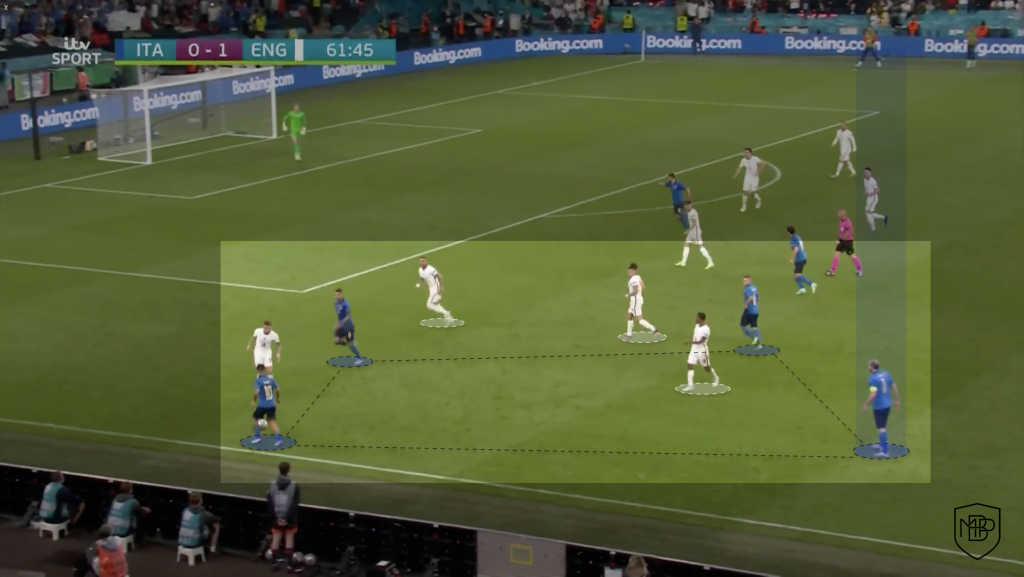 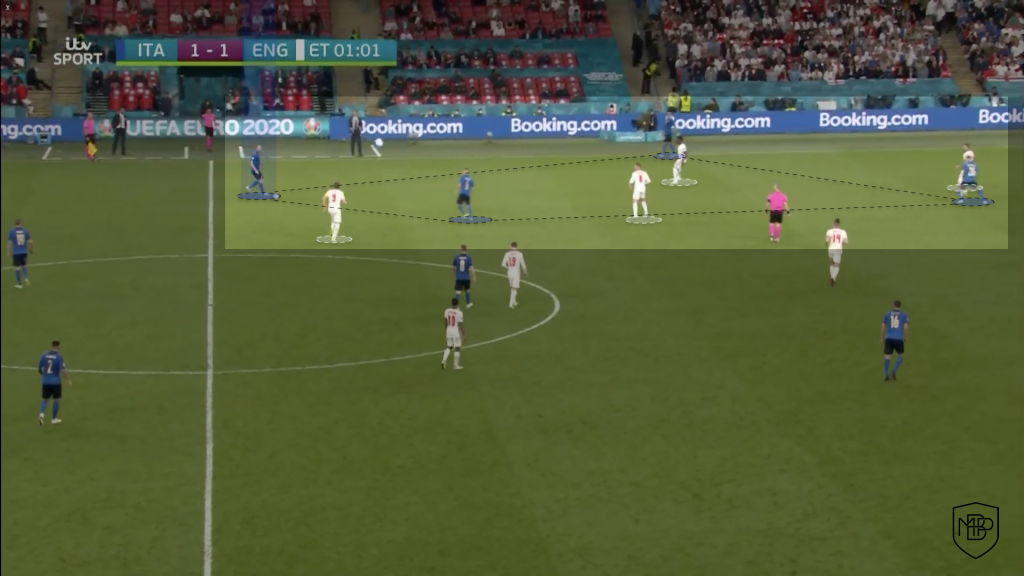 It was then where the roles of Verrati and Jorginho emerged. As well as being one of the side points of the diamond, both players were in charge of mobilising the Azzuri’s play, directing the attacks towards the favourable spaces for progression, either within the same wing or in the opposite one. 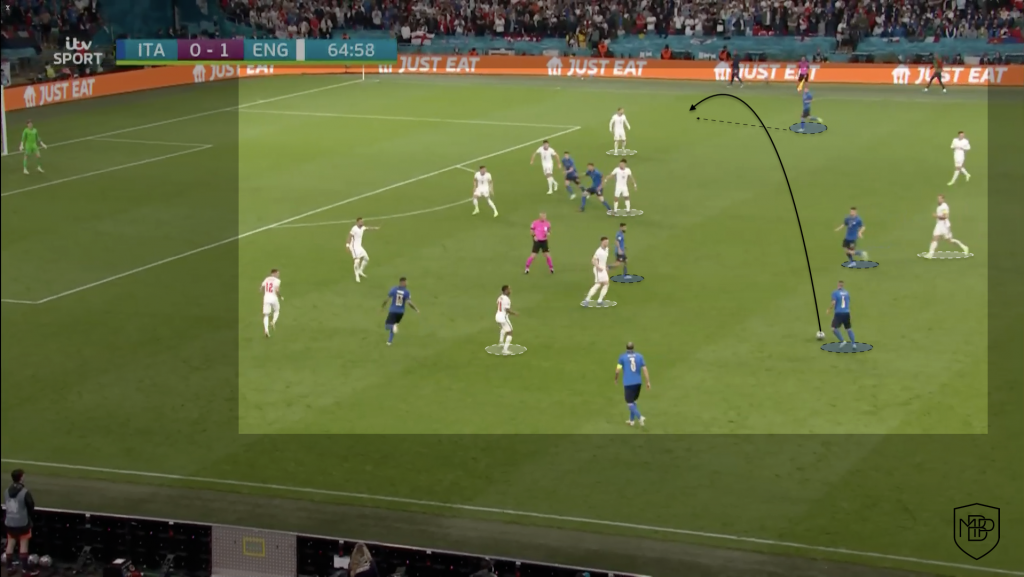 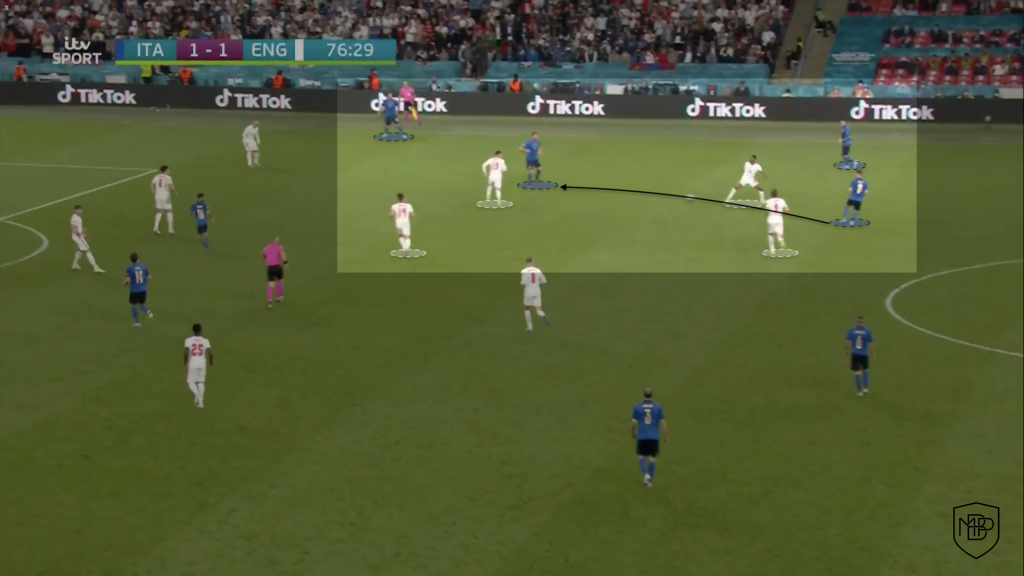 Once Italy arrived to the finishing zone, the attacking behaviour was the application of the principle of ‘attacking the box through 2nd line runs’, either through the midfielders or the ‘false’ 9.

The Role of the Coach:

The coach who had the greatest impact on his team’s performance was Roberto Mancini. Although the Italian coach did not make any significant changes during the match, his management of different aspects such as his reading of the game and managing the substitutions was excellent.

Firstly, faced with an adverse situation of going behind after the third minute of the match, the Italian coach remained faithful to the match plan he had designed. He strengthened the qualities of his team, and only readjusted the positioning of the line of three central defenders in the attacking phase, forcing them to have more width to achieve the tactical objective previously explained. 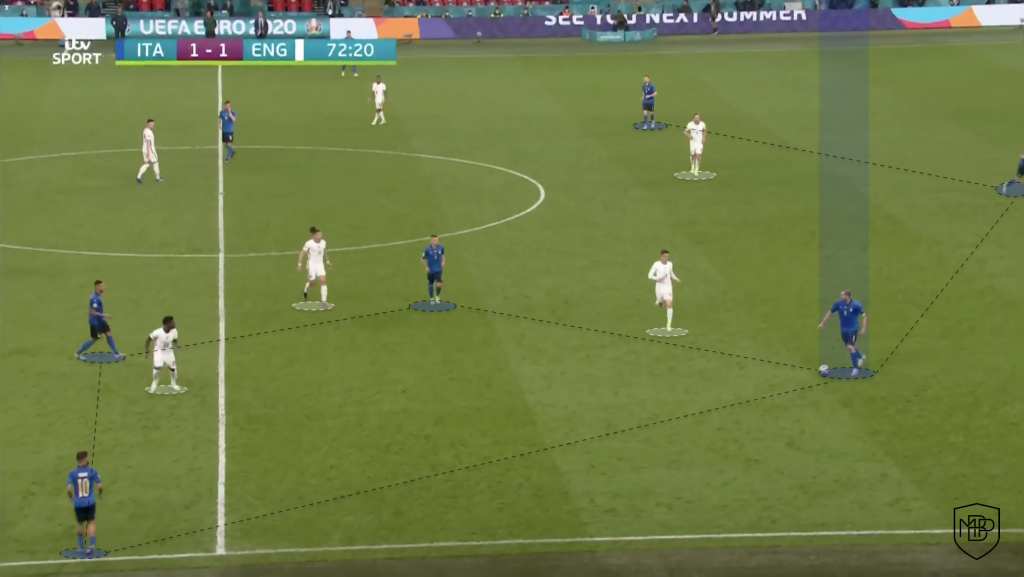 Secondly, faced with a defensive structure composed of 5 defenders, the Italian coach decided to remove key player Ciro Immobile for Domenico Berardi. The aim was to take away the defensive reference of the English centre-backs and to surprise them with runs into the box from the second line, or from players who were not referenced. 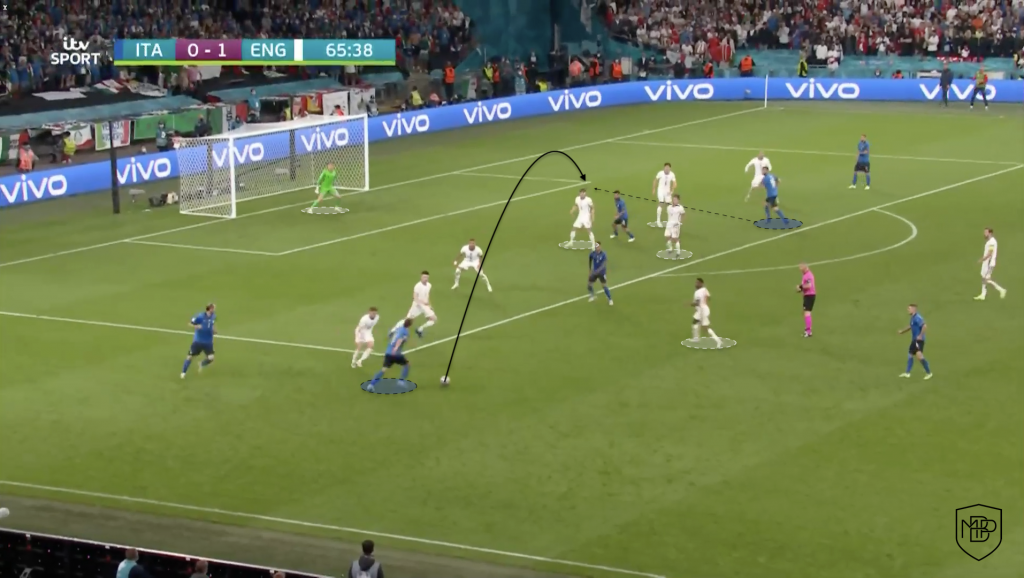 For the goals in this final, we would like to analyse in more detail the one scored by England. It was preceded by Harry Kane receiving the ball unmarked in a free position. This allowed him to progress with the ball and direct it towards the right side to his teammate Kieran Trippier. 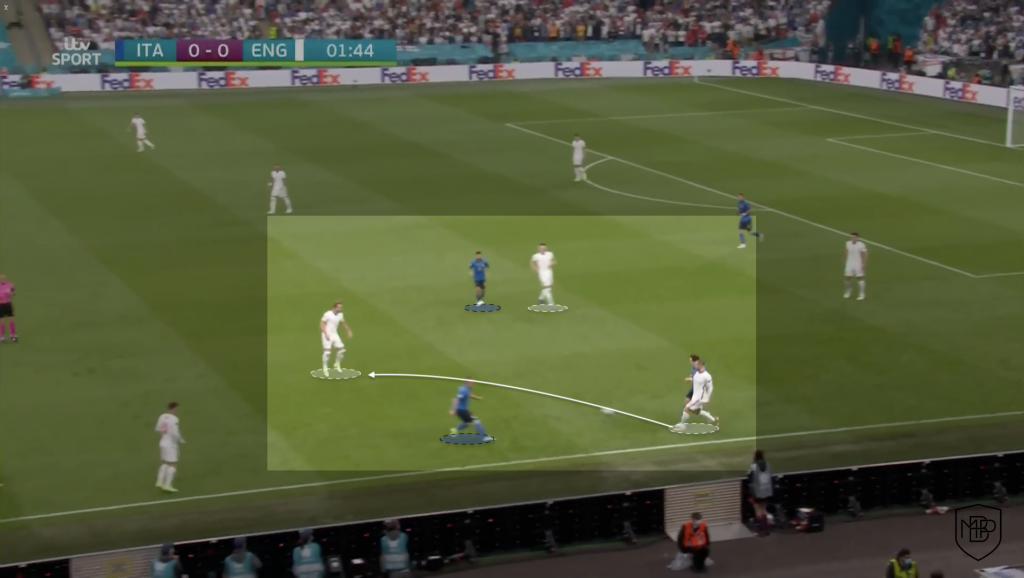 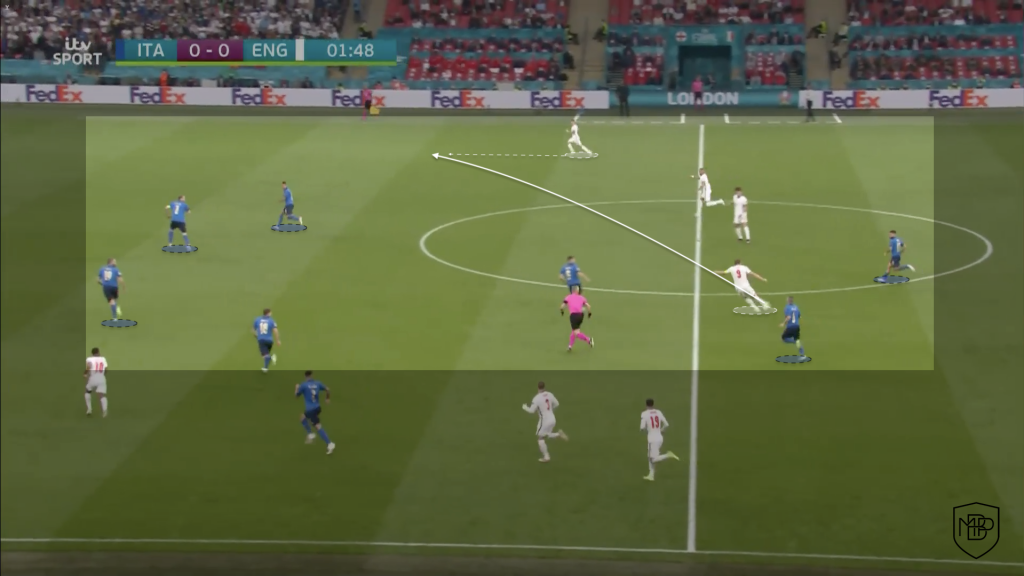 It was there where the Atletico Madrid player delivered a cross from zone B towards the far post, which was brilliantly finished off by team-mate Luke Shaw with a superb left-footed half volley. 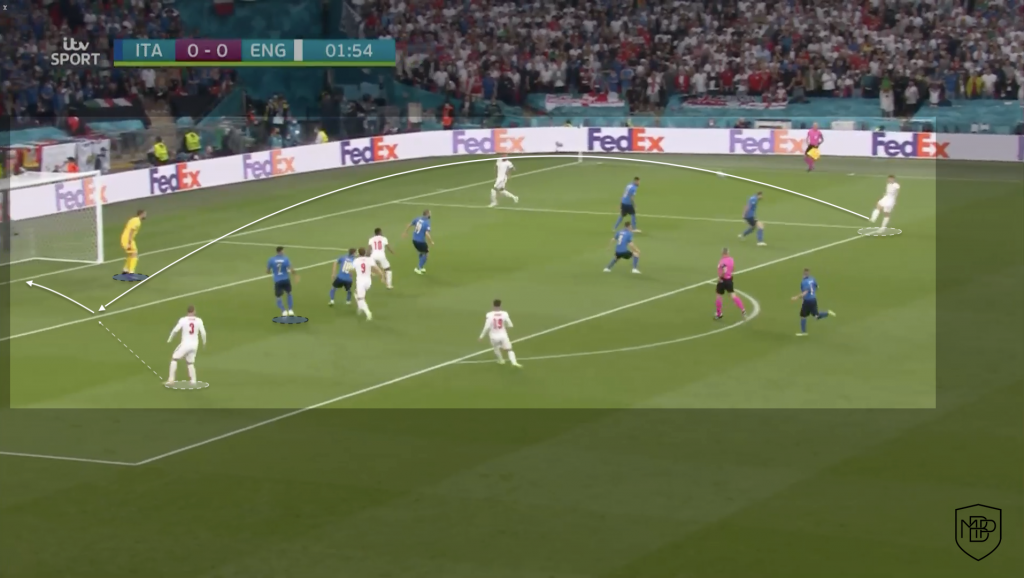 How do the fundamentals of the game appear?

The Meta-game as a game condition