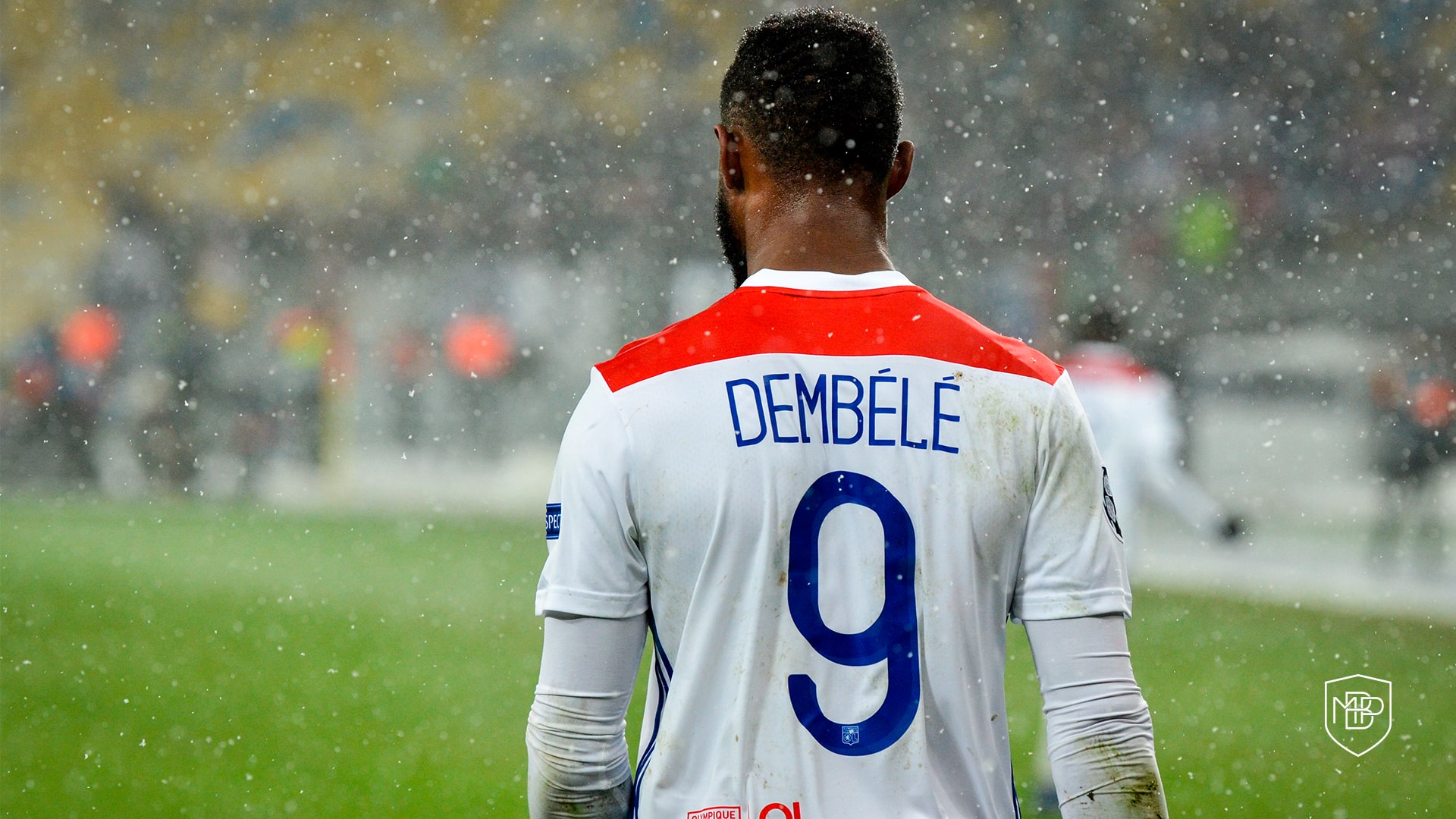 Moussa Dembélé has recently joined Atletico de Madrid. With no doubts, the French player will bring new variants to the current La Liga leader. From MBP School of Coaches we will analize the player by highlighting 3 forwards fundamentals, the most characteristic of the player.

Block: Providing depth to the attack

The new Atletico de Madrid player stands out for his capacity to set and ‘sink’ their rivals defensive lines. This is possible through the application of the fundamental “guaranteeing the team’s depth” during the offensive phase. The main objective of this fundamental is to create offensive intervals between the opponent defensive and midfield lines.

To apply this fundamental properly, the forward must sink the defensive line by positioning at the same height as the defender who is closest to the backline. Actually, sometimes it will be even better to start the run being offside, making the defender to lose sight of the forward and having to go backwards. 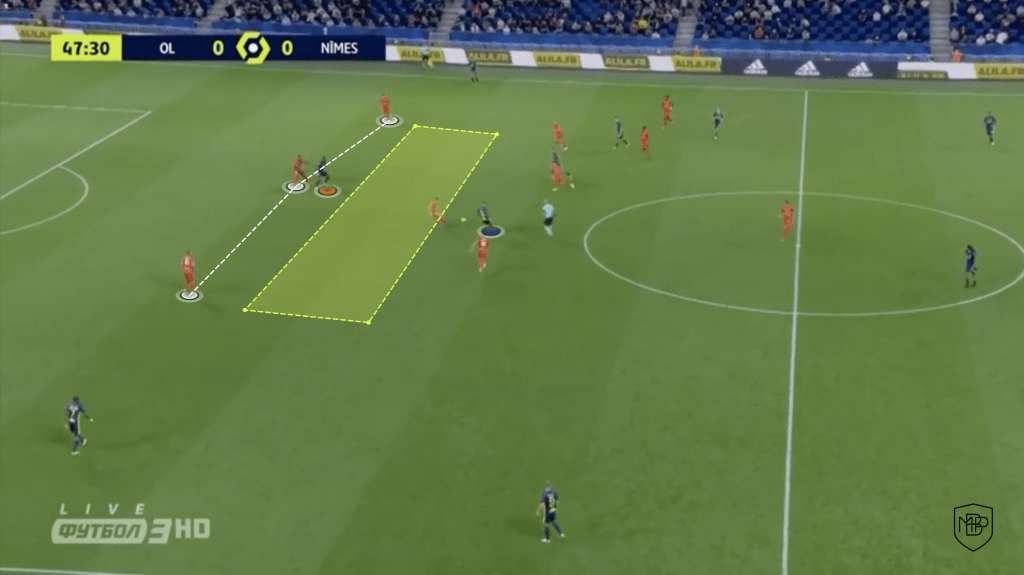 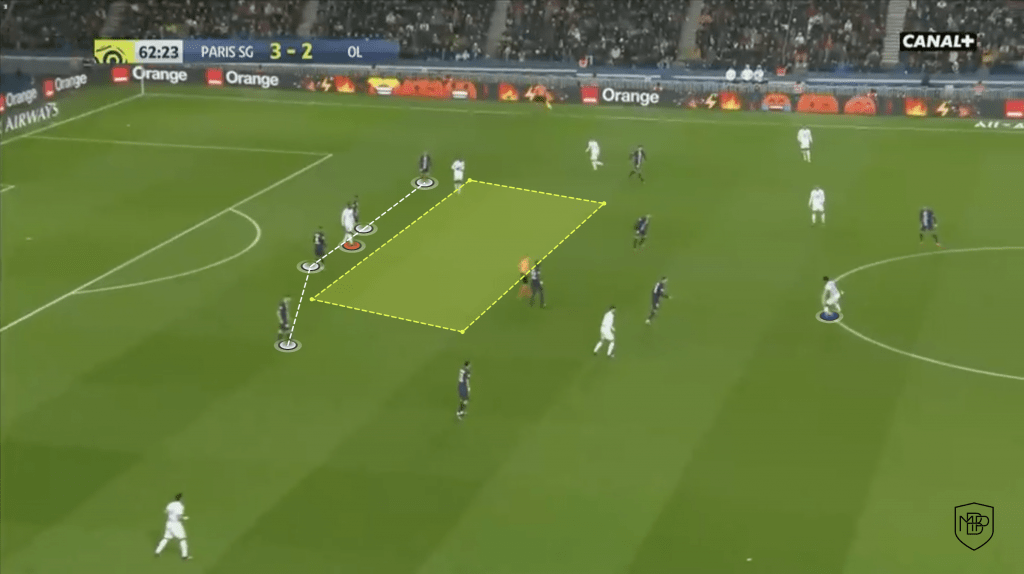 Fundamental: Dismarking diagonally when supporting to progress the play

Another virtue of Moussa Dembélé is his capacity to offer support to the midfielder line, as mentioned in the previous fundamental. These supports are often diagonally to the player who has the ball, as we can see in the pictures. This allows him to see if the centerback reduces the space, so he can attack the defensive line if no one else comes to him. In addition, Dembélé is a very dynamic player: he can fell to the side line and apply the fundamental from a different position. 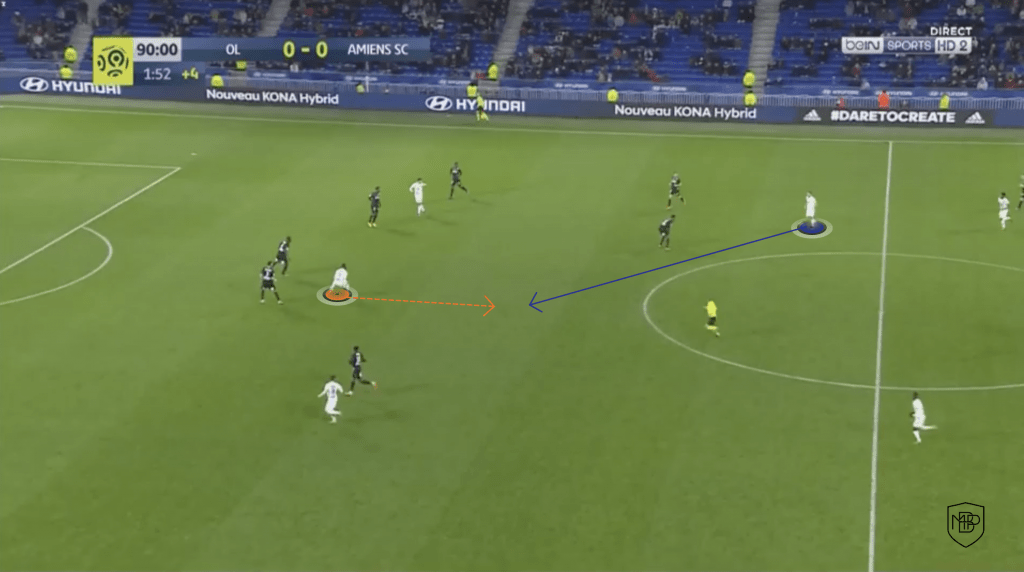 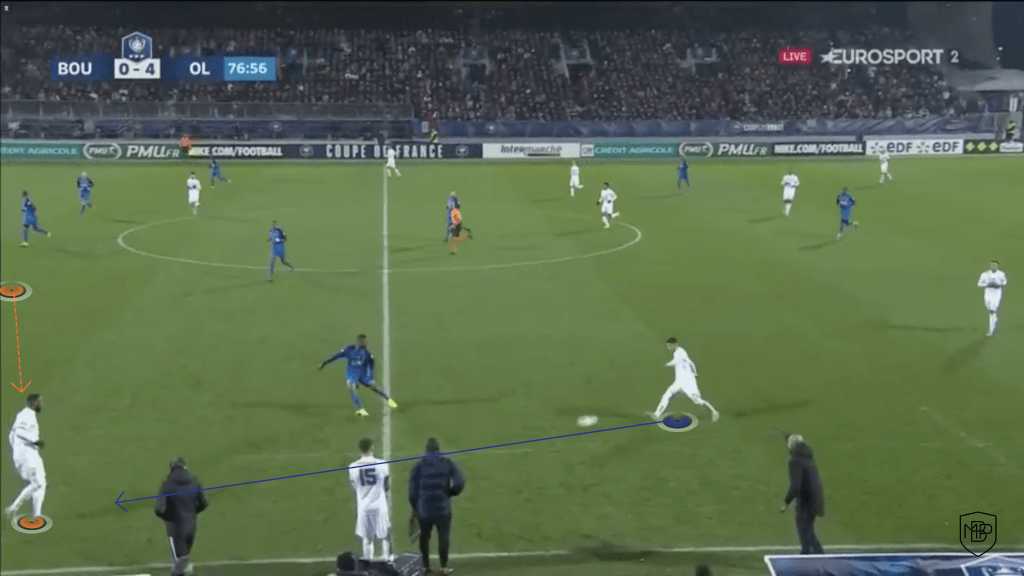 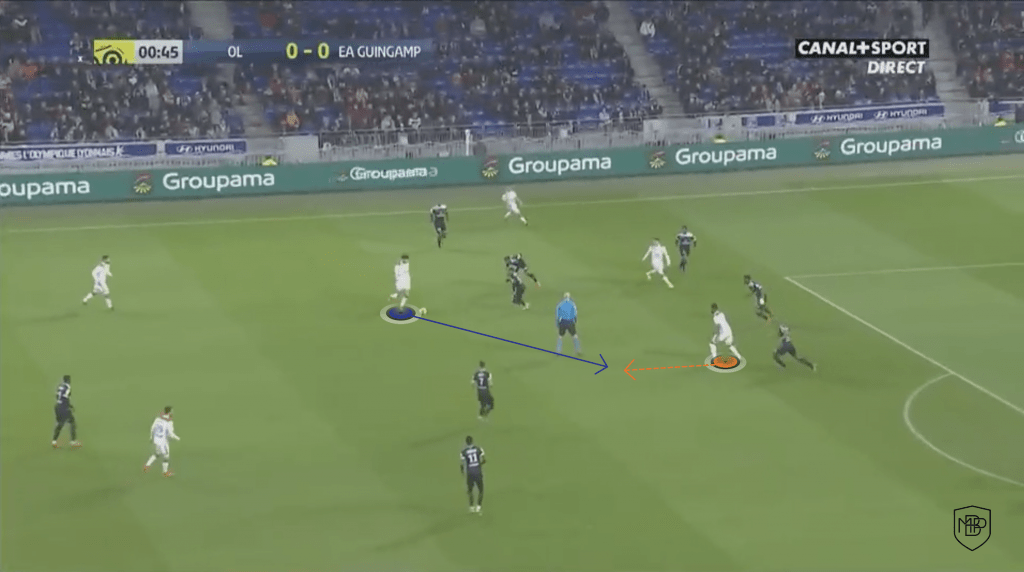 The application of that fundamental is related to the previous one: with no space created, the player would not be able to make those support moves for his teammates.

Fundamento: Dismarking in direction to goal through taking the back of the center-backs

The last analyzed fundamental is the player’s offensive capacity to identify an unbalanced defensive line to dismark himself. Moussa Dembélé has a highly developed cognitive structure, which allows him to be able to identify such imbalances to attack them by dismarking himself and to be able to find situations with space advantage over the defenders. 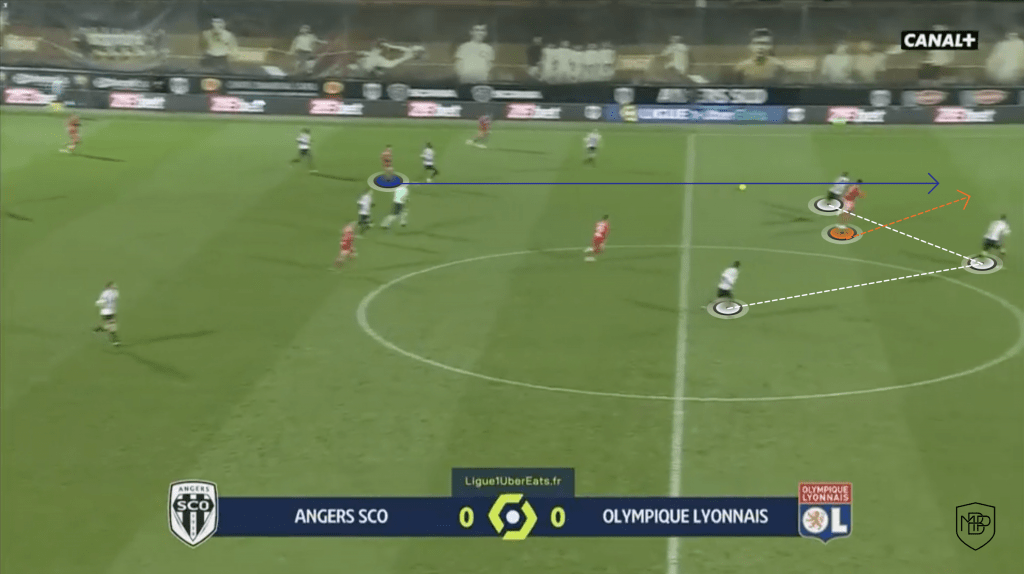 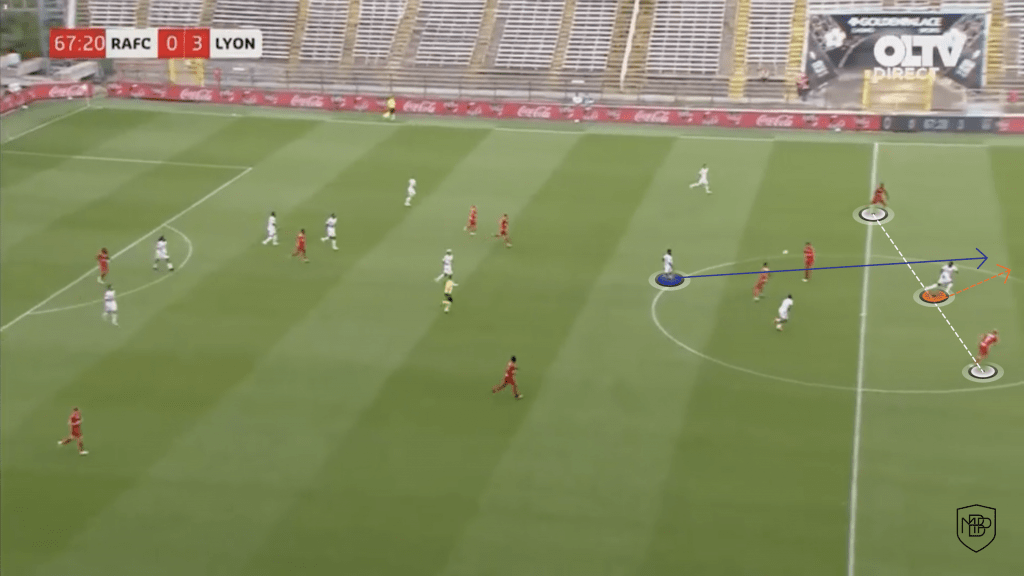 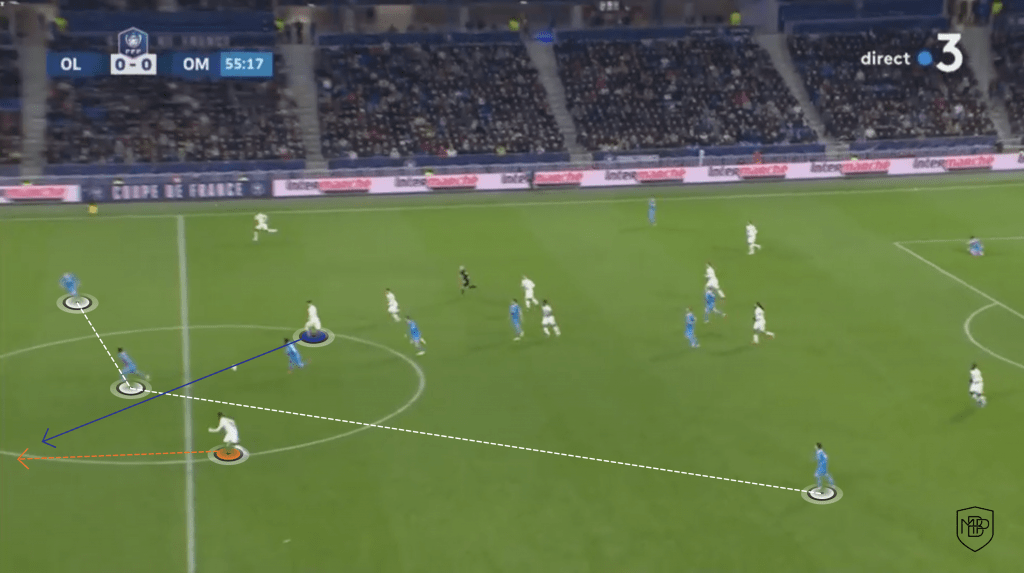 In addition, it is worth noting its great reaction speed in short distances, together with its speed of movement. Both skills, together with his ability to apply this fundamentals, make him a very dangerous player in open field situations.

After analyzing the three fundamentals of the new Atlético de Madrid player, we can highlight that, without a doubt, Moussa Dembélé will offer the ‘colchoneros’ a series of offensive capabilities which the team led by Diego Simeone lacked up to now.

Deepening into the first fundamental analyzed, the correct application will help to generate free spaces between defensive lines of the rival team, where players such as Correa, João Félix or even Marcos Llorente, can take advantage of.

Regarding the second analyzed fundamental, the perfect application of it by the French player will help the team to have more offensive mobility and offer different passing lines, compared to teams that choose to lock themselves up, close to the rival area.

Finally, as we have seen in the last fundamental analyzed, the cognitive ability of Dembélé to identify unbalanced defensive lines is very high. This player’s virtue along with his speed, unlike Luis Suárez, will allow the ‘rojiblancos’ to be able to throw deep balls when these unbalances happen, in order to generate dangerous situations in the rival goal.