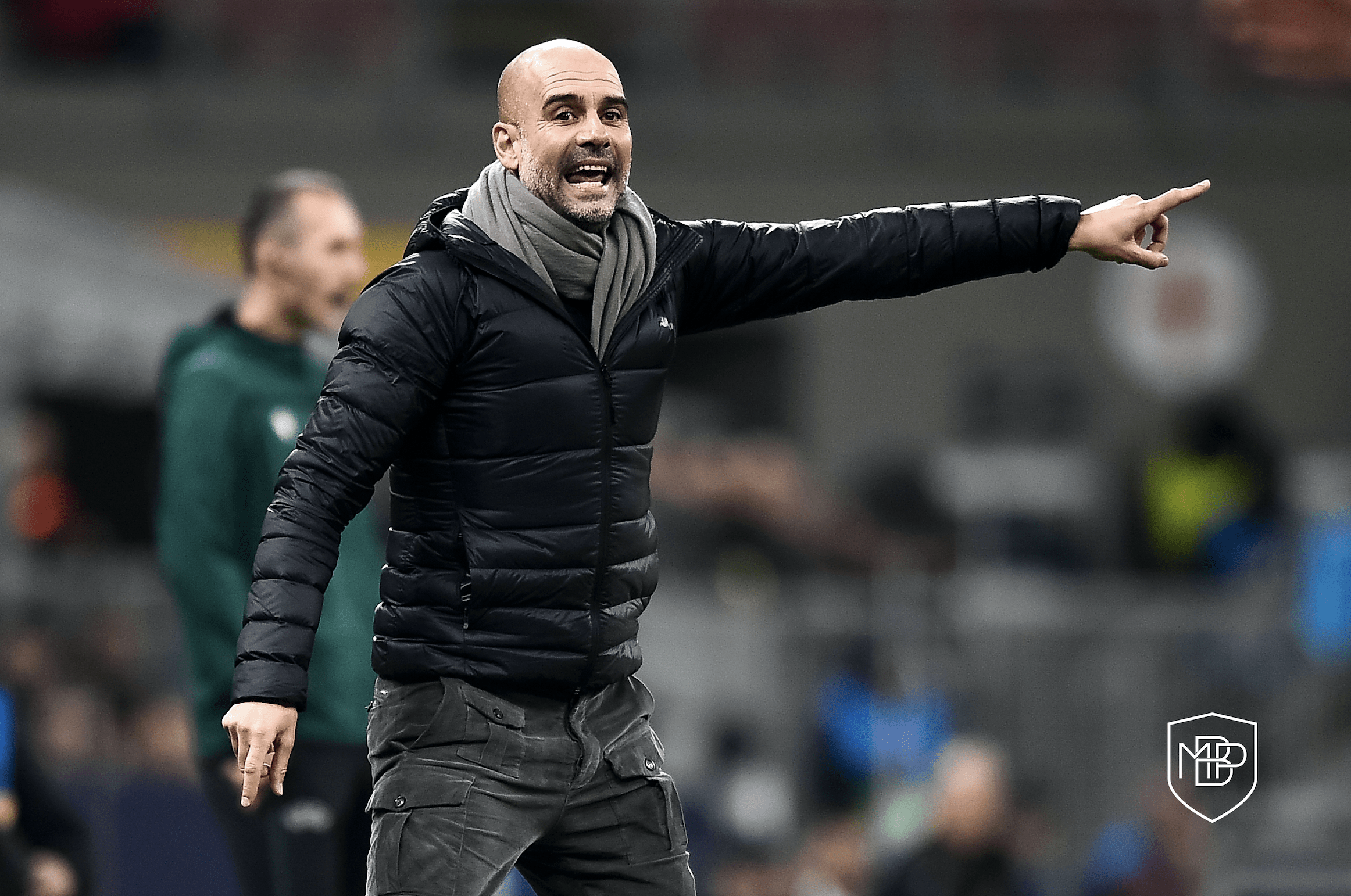 Recently I posted an article entitled, “A Deeper Look into Tactical Periodization” (Click here for article http://www.togsoccer.com/single-post/2016/02/05/A-Deeper-Look-into-Tactical-Periodization), and with the current hype surrounding the work of Pep Guardiola at Manchester City, I want to expand upon the thoughts I suggested in the previous article.

Under the Structured Training and Tactical Periodization methodology, a soccer team is conceived as a complex system, where a group of players interact with one another to achieve a common goal (a certain way of playing, with the aim of achieving victory) (Tamarit, 2014). Interestingly, Edgar Morin’s four principles that guide the complex thinking paradigm include (Mallo, 2015):

From this perspective, complexity only exists if both order and disorder are present, as a complex structure is a resultant from the lack of equilibrium (Prigogine, in Martin Acero & Lago, 2005a in Mallo, 2015). More specifically, a complex system (team) is permanently in a dynamic state that oscillates between phases of order and disorder (theory of chaos) (Mallo, 2015). This notion suggests that a complex system (team) has the capacity to learn, and subsequently self-organize themselves to ensure appropriate fluctuations between the two states. With this in mind, the coach’s ‘Game Model’, and subsequently their principles, sub-principles, and sub-sub principles are responsible for guiding the team’s self-organization process.

At the forefront of every team (complex system) is a head coach who holds a clear idea of how the game of soccer should be played. Tamarit (2014) supported such idea by stating, “The coach must have a clear idea of the game (Tactical Culture) [Way of seeing and understanding Football. It is the football that the coach has in mind], this idea must be singular and specific and it will be determined by his own football history and by the type of football that he has seen and loved.”

After years of studying Guardiola’s work, it is clear that his ‘Game Model’ revolves around the usage of ball possession and high pressure to create a sense of order within his team while causing disorganization in the opponent. The idea is that a coach’s ‘Game Model’ is their essence, however, the model must be molded based on the club and country’s football culture, and the players’ capabilities to name a few. When describing Guardiola’s style of play, the Catalan coach said, “Move the opponent, not the ball. Invite the opponent to press. You have the ball on one side, to finish on the other”, and “Possession of the ball is only a tool to organize yourself and cause disorganization in your opponent.” Interestingly and maybe to some surprise, Guardiola said, “Defensive organization is the cornerstone of everything else I want to achieve in my football.”

It is clear that each team under his guidance adopted the previously stated philosophy, however, slight adjustments were made in order to meet the clubs’ footballing expectations. For instance, FC Barcelona executed an elaborate style of play that was more horizontal in nature compared to the verticality of Guardiola’s Bayern Munich. At this moment in time, it appears that Manchester City will adopt a style of play that is a hybrid of both.

In order to best apply the concepts of complex thinking and the implementation of a ‘Game Model’, I will explain three game situations (one per club – Barca, Bayern, and City) that occur in the same moment of the game. I have loaded 2 photos per situation for each club, and interestingly, the execution and end result is practically the same in all instances.

To begin, in order for the system to interpret the game situation in the same language, as the playing principles provide the group with an organizational structure. Tamarit (2014) said, “The game model has to be clearly detailed and explained to the players so they are able to understand what the coach wants in every moment of the game and what they have to do to achieve the expected qualitative organization.”

With this in mind, Guardiola’s principles for the Transition from Offense to Defense might consist of:

Barcelona Transition from Offense to Defense

From beginning of the transition to the end, you notice that FC Barcelona had a back line of Abidal, Pique and Puyol during the offensive phase (due to the positioning of Alves as a midfielder in this game in order to apply a pressing trap on CR7 with Puyol), however, in the end, the team transitions and self-organizes a defensive line of (from right to left) Abidal, Busquets, Pique, and Puyol. In this game, Busquets was given the responsibility to provide balance in the defensive line during transitions due to FCB’s asymmetrical structure. 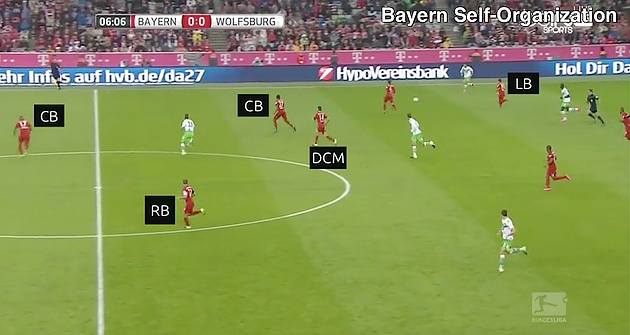 In this instance, Bayern executed an attack down Wolfsburg’s left side, ultimately ending with Bernat (LB) in the box searching for a cross. Similar to Busquets, Xabi Alonso was also given the responsibility of regaining the defensive line’s balance by positioning as a central defender during defensive transitions. In the end, Bayern self-organized themselves to defend Wolfsburg’s counter attack with a defensive line of (from right to left) Boateng (Right CB in this game), Alaba (Left CB in this game), Xabi Alonso (DCM in this game), and Lahm (RB). 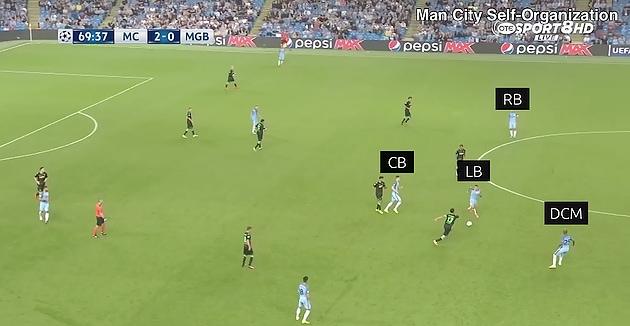 In this example, Manchester City lost possession when John Stones (CB) and Kolarov (LB) were positioned as midfielders to cause disorganization in the opponents structure. More so, only Otamendi (CB) and Fernandinho (DCM) were positioned in the defensive line. However, in the end Manchester City self-organized themselves to create a defensive line of (from right to left) Kolarov (LB), Fernandinho (DCM), Otamendi (RCB), and Zabaleta (RB).

Due to the Complex System principle of ‘Spontaneous Emergence’, each system demonstrated a different organization of players while in possession of the ball. The idea is that due to the quality of of players at the coach’s disposal, organizational strategies will spontaneously emerge within the flow of their ‘Game Model’. For instance, when Barcelona lost possession, they were playing with a back line of three players (one could argue it was a back line of one). Conversely, Manchester City had a defensive line of two players. In essence, even though the team ‘appeared’ disorganized, the system was ‘on the edge of chaos’ and ultimately able to self-organize themselves (thanks to the coach’s game principles) to solve the game situation.

From these three examples, it is clear that regardless of the club he works for, Guardiola will maintain his principles during the defensive transition phase. More specifically, the Catalan coach has been able to teach his team how to interpret the defensive transition moment in the same language. Interestingly, Jose Mourinho once said that his desired team “would be one where, at any given time, at any given situation, all the players would think in the same way. This is my idea of team concept and it is only possible with time, hard-work and composure” (Mallo, 2015). Although they appear different, Guardiola also seems to share the same belief as Mourinho.

It has to be understood that there is no right or wrong way to play the game of soccer, but there is indeed a difference between an organized team and a disorganized one. As previously mentioned, the coach’s ‘Game Model’ is shaped by their personal beliefs and experiences, and simply adapted based on characteristics such as the club they work for and the players at their disposal. For instance, when Werder Bremen played Bayern Munich last season, their defensive transition sub-principle in the FGZ appeared to be “when the ball is dispossessed, apply immediate pressure to force a backwards pass in order to buy time for the team to retreat into a middle defensive block.”

Soccer is a complex game, and it is the role of the coach to try and reduce the complexity that exists by teaching their team how to interpret the game in the same language. Interestingly, when Guardiola was recently asked about Leicester City winning the EPL with hardly any possession, Guardiola responded, “That is why football is amazing. So a big congrats to Leicester because his manager grew up in Italy and I know him, so it’s perfect. He does what he believes. But I believe in what I believe, and I try for my team to play the way I like.”

The Management of Defeat in Professional Football