Liverpool FC has made official the signing of Darwin Núñez as their new number 9. With the arrival of the former Benfica player, Klopp’s team will redesign their attacking trident after the signing of Luis Diaz in the winter transfer window and the more than likely departure of Sadio Mané.

For this reason, at the MBP School of Coaches, we are going to describe in depth the player profile of Darwin Núñez through his structures and fundamentals, as well as try to foresee what impact the player will have on the Reds.

Darwin Núñez possesses enviable physical and technical characteristics which are in line with today’s modern player. In addition, the striker has the ability to play in different positions up front. However, where he has exploited his full potential this past season has been as a center forward.

Through the position of the number 9, the Uruguayan has been able to maximize the full potential of his different structures, especially his conditional one. The striker has a brilliant movement of speed. Thanks to this, Núñez has proved to be fearsome over long distances, leaving opposition defenders trailing behind. 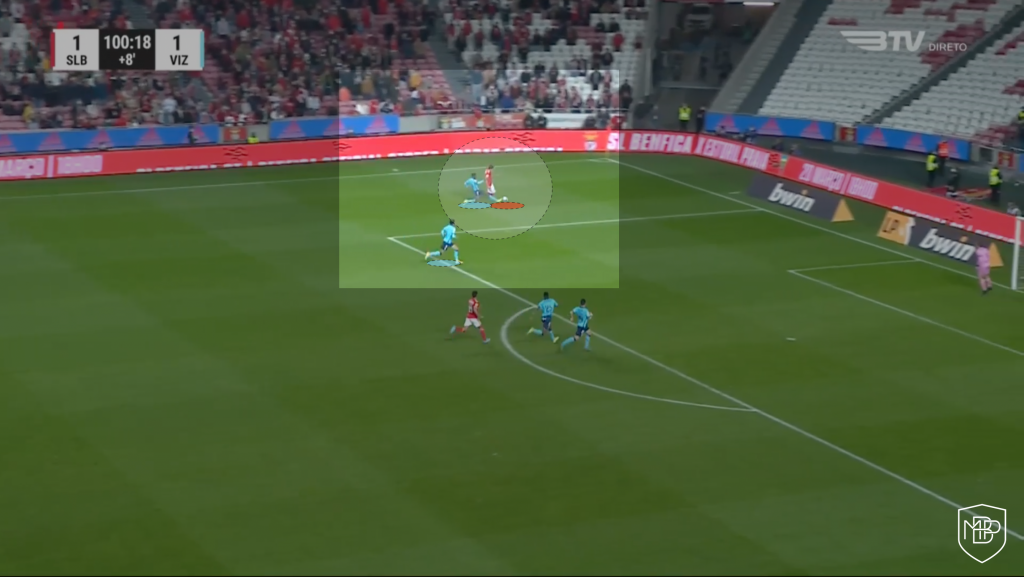 Likewise, another of the great qualities that the Uruguayan has shown when he has played as a nine has been his strength in all 1vs1 situations and aerial duels due to his physical strength. The striker has been a headache for opposing defenders, coming out on top in most of these battles.

Finally, as can be seen in images below, the new Anfield star is able to combine the above physical abilities with a great command of coordination skills. In the event that he is unable to get past the opponent, Darwin possesses enough individual technical quality to get past his direct defender through dribbling. 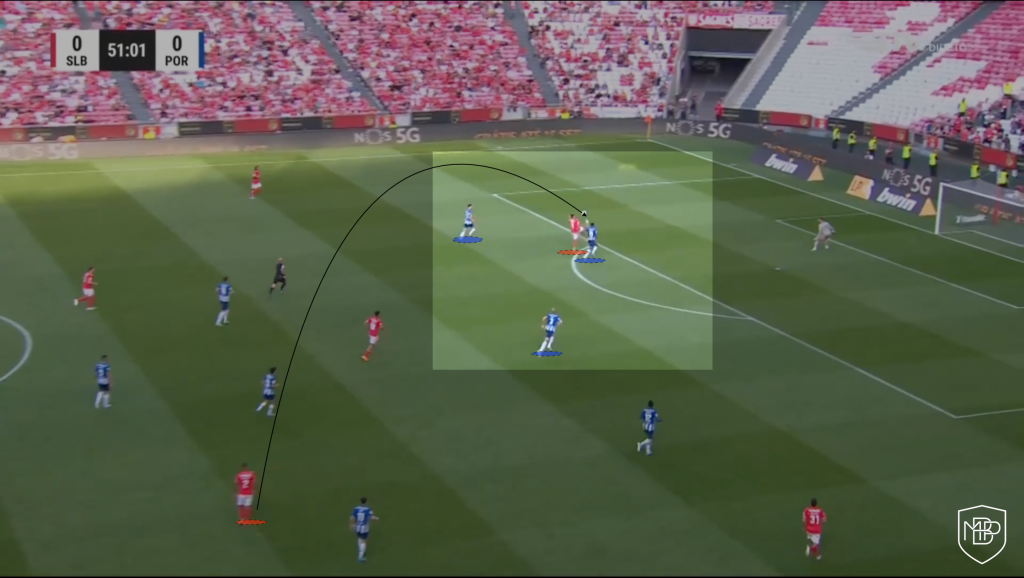 Looking deeper into the tactical aspects of the game, Núñez has proven to have a great command of different fundamentals of both the winger and center forward position. In addition, the Uruguayan has been able to take advantage of his physical and technical qualities to obtain more from his tactical behaviors.

The first thing to highlight is the striker’s IFP of ‘dismarking in the direction of goal behind the center backs’.

By always playing on the last shoulder of the opposition defence, thus offering maximum offensive depth to his team, the player does not hesitate to make runs in behind when he identifies a defensive imbalance in the opponent’s line.

Also, a micro aspect that we must highlight is the correct timing from the run to the pass of his teammate. This allows him to avoid falling into an offside position.

Another of the great features of the player is his accuracy in finishing at goal. The forward always looks to place the ball out of the goalkeeper’s reach, applying in an excellent way the fundamental of ‘prioritizing accuracy over power’.

As a result, the striker always places the ball out of the goalkeeper’s range, making it very difficult for them to stop his shots on goal. In addition, we must highlight the fantastic shot he has from medium and long distance when he starts from the left sector.

Finally, one of the main attributes of the striker is the ability in ‘creating an advantage through the control of the ball’. In today’s game, where the time for players to act is becoming shorter and shorter, generating an advantage over the defender and being able to gain enough time and space to successfully execute the next action is a key factor.

What impact can Darwin Núñez have on Liverpool?

Although the arrival to a new country, league and club entails a time of adaptation for all players, the Uruguayan’s impact on Klopp’s team should be notable. Núñez has a player profile that the club does not currently have. With his addition, Liverpool have signed a reliable goalscorer.

Unlike Luis Diaz or Mané, the player can find the goal with ease. This would allow the English team to take some pressure off Salah as the main offensive weapon and distribute responsibilities.

Another aspect that the Uruguayan should contribute is an improvement in attacking aerial play. Salah, Mané, Firmino and Luis Diaz have never been specialists in the air. However, Núñez, at 6,1, will offer his new coach an offensive variant in the way the team can attack opposing sides.

The signing of Darwin Núñez by Jürgen Klopp’s team brings a step up in quality for both parties. Both player and club will benefit from their new partnership, as the player will improve the current squad, and the club will provide the ideal context for the Uruguayan to consolidate himself as a world-class player.