FC Barcelona have officially announced the signing of Jules Koundé from Sevilla FC. With the arrival of the French defender, the Blaugrana are building a squad to the wishes of their coach Xavi Hernandez, with the one they hope will lead them to glory in 2022-2023.

This week at the MBP School of Coaches, we will describe in depth the player profile of Jules Koundé through his structures and fundamentals, as well as try to foresee what impact the player can have on the Culés.

What player profile does Jules Koundé have?

The Catalan side’s new defender is a skilled center back. This is reflected by his ability in the coordination, cognitive and socio-affective structures. However, it is the coordination structure that stands out above the rest.

Koundé has a great command of his body, either in the coordination of different movements or by performing technical actions.

Focusing on the more coordinative aspect, we can see how the Frenchman makes use of his good balance to be impassable in 1vs1 situations. Through his body control and his low center of gravity, the Les Bleus international is very reactive in this type of situation, managing to steal the ball on a large number of occasions. 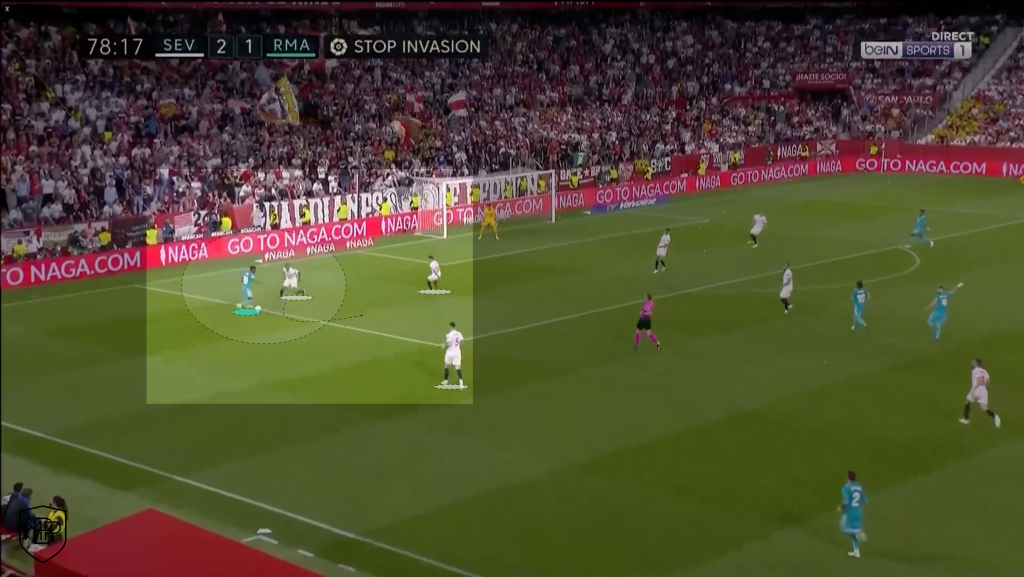 On the other hand, observing his technical mastery thanks to his excellent coordination, we can see that Koundé is very comfortable with the ball at his feet. One of his most common on-ball behaviors is to drive with the ball to break opposition lines of pressure, fixing the opponent to free up a teammate.

Looking deeper into the tactical aspects of his game, the French international has shown a great mastery of different fundamentals despite his short experience at the elite level. In addition, the player has been able to take advantage of his physical and technical qualities to achieve a better efficiency of his tactical behaviors.

The first fundamental that we want to highlight is one of the center back in ‘reducing the space from the opponent dismarking in support to feet’.

The application of this fundamental is one of the main mistakes of many central defenders, however, Koundé is consistently successful in its implementation. One of the key points to the correct application is to know how to identify if in addition to your direct opponent, there is also an opponent nearby who can attack the space left. If so, the central defender must prioritize protecting the space.

Another of the new Blaugrana player’s great strengths is ‘covering the center back or full back who is defending the on-ball opponent’. Thanks to his cognitive ability, the defender knows when to get closer to cover his teammate. In addition, another of the micro-concepts that speak of the player’s optimal application the IFP is his ability to cut out inside passes while executing the fundamental.

Finally, another of the fundamentals that Koundé consistently executes correctly is ‘jockeying the on-ball opponent to avoid being fixed – minimizing the space for other attackers’.

In situations where he is outside of the finishing zone and the opponent has a spatial advantage, the center back interprets very well that the best action is to jockey without jumping up to engage, waiting for the recovery runs of teammates that allow the team to re-establish its defensive organization.

What impact Will Jules Koundé have on FC Barcelona?

If Xavi Hernández has insisted on signing the Frenchman, it is because he believes that the adaptation and impact he will have on the Azulgrana team will be immediate.

One of the factors that he will be able to contribute, and that in turn will help to enhance the Culé game model, will be to position the defensive line higher up. This helps to keep the defensive block compact. Given his outstanding change of pace, Koundé is not afraid to push forward with the team when they are pressing high up the pitch, as, in the event of having to retreat, the player is imposing when facing the opposition strikers.

Another factor that has certainly attracted the attention of Xavi Hernandez is his ability to be involved in the build-up. Although he does not have a great long passing range that allows his team to break the opponent’s defensive block, his cognitive ability allows him to identify free teammates in close and intermediate areas, to connect with them and progress in an associative way.

However, one of the points that the Terrassa coach will have to work on to improve, and which he is sure to take into account, is the improvement of the defender’s aerial game. His 1’78 m of height sometimes works against him when he faces physically powerful strikers. In spite of possessing excellent anticipation, when the ball is in the air he struggles in the duels.

The signing of Jules Koundé joins the collection of players that FC Barcelona have signed during the current summer market. With the incorporation of the Frenchman, the Azulgrana sign a player of the present, but also with a great potential ahead of him.

At the MBP School of Coaches, we will very closely follow the development and performances of the player under the direction of Xavi Hernández.

The 3 phases to set up a training session